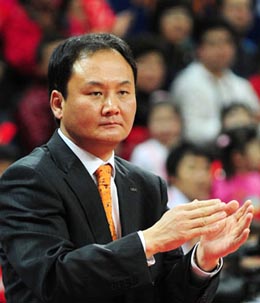 “My goal is to lead the team to the medal rounds,” stated Yoo. “It’s a big responsibility. Everyone knows that the Korean national basketball team is shaky.”

It’s customary for the KBA to choose the Korean Basketball League title-winning team’s head coach to lead the national squad, and this year was no exception.

Yoo led the Mobis Phoebus to a first-place finish in the 2009-10 regular season and went on to win the title over defending champions KCC Egis in six games.

Yoo has been the most successful head coach in the KBL over the past six seasons. Since joining Mobis in 2004, he’s had the best regular-season record four times and won the league title twice.

Yoo will be in charge of leading a team that is coming off a disappointing seventh-place finish at the 2009 Asian Basketball Championships in Tianjin, China, Korea’s worst-ever showing at the tourney. By failing to place in the top three, Korea missed out on a slot at the 2010 International Basketball Federation World Championships in Turkey.

Korea cruised past the first two group phases of the tourney but lost to Lebanon 65-68 in the quarterfinals. A 66-82 blowout loss to eventual champions Iran also revealed a lot of weaknesses on the national squad.

Home team China, which placed second in the Asian Basketball Championships, is tabbed as the early favorite for the Asian Games Nov. 12-27, but Korea will have a shot at redemption.

“We have more time to prepare this year, and that’s a big plus,” said Yoo. “The determining factor will be how much focus and determination our team, including myself, will bring to this event.”

The KBA has hired American legend Lenny Wilkens to help with player selection and training. To improve its odds, the association announced last week that it will hand a 15-game suspension to players who turn down the offer to join the national team without a plausible reason.

The national team has the option of adding one naturalized Korean player to its roster. KCC’s Jeon Tae-pung and Samsung’s Lee Seung-joon are expected to compete for that spot.