Woody Allen’s reaches for the stars for next film

Woody Allen’s reaches for the stars for next film 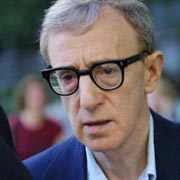 Woody Allen is turning to Carla Bruni-Sarkozy and a host of other world-famous stars for his next movie, “Midnight in Paris,” he revealed Friday.

Along with France’s first lady, the romantic comedy will also feature Owen Wilson, Marion Cotillard, Rachel McAdams and Kathy Bates in the film’s principal roles, according to a press release.

Allen said the film, which will begin shooting this summer in Paris, follows “a family traveling to the city for business.” The party includes a young engaged couple that has their lives transformed as their journey unfolds.

“The film celebrates a young man’s great love for Paris, and simultaneously explores the illusion people have that a life different from their own is better.”

Allen’s latest movie, “You Will Meet a Tall Dark Stranger,” will have its world premiere at the Cannes Film Festival next month.