Behind the front line, a shrouded military

Behind the front line, a shrouded military 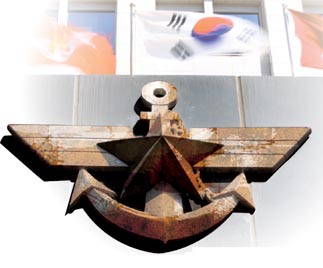 When the Cheonan sank last month, the initial reaction was shock and sadness, which quickly gave way to rage: with a government accused of dragging its feet, but also with a military that seemed unprepared for a North Korean attack.

But anger with the military runs deeper than over a single event. Mistrust of the institution is widespread because it has failed to open itself up, using the excuse of national security, while the rest of the country has embraced democracy.

South Korea’s military dictatorship may be a thing of the past, but the North’s constant saber rattling in the form of nuclear tests, missile launches, spy incidents and the occasional skirmish continue to give Korea’s men at arms an immediate relevance - and an excuse to conceal things from the public. That right to secrecy is enshrined in the National Security Law, which places restrictions even on regular citizens’ freedom of speech for the sake of preventing enemy subversion, but is even more of a cloak for the armed forces. It’s the legal manifestation of the bubble in which the military operates, isolating it from the massive changes the rest of Korean society has undergone. To date, for example, no civilian has ever been named defense minister.

Every year, a report is quietly released titled, “Military deaths caused by accidents.” In 2008, there were 134 names on that list, including 75 suicides. The suicides are usually explained by a “failure to adjust to military life.”

That explanation is unacceptable for Joo Jong-woo, whose son, Pvt. Joo Jung-wook, committed suicide in 2001 at age 22.

“They always say that so that nobody has to bear responsibility,” said Joo. “My son died for nothing. He was a good boy, but the military kept saying he must have had some personal problems.” Joo still believes that his son was killed while being hazed by his peers. But the military never considered any other cause of death. The official record said that he jumped off a cliff while on patrol duty.

“It felt like a notification, not an investigation into what really happened. The military just wanted to move on and close the book,” Joo said.

Other loved ones of young men on that list have similar tales of frustration dealing with the military. 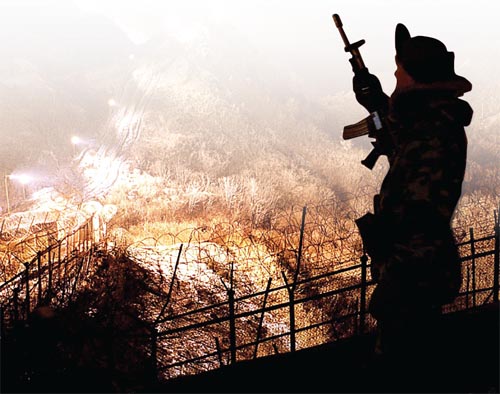 On April 14, a private first class only identified by his last name Song was found dead at an observation post with four gunshot wounds. Song’s body was discovered by two other soldiers standing guard duty nearby. The parents of the private have asked the military to conduct a full autopsy in order to determine whether he was murdered or committed suicide, but they have not yet received any results.

“When an accident happens, the military police takes charge and the MPs, although technically under different jurisdiction, still fall under the influence of the unit’s commander. It’s very natural for a unit commander to remove any threat to his or her career,” said Park Jong-deok, a former official on the Presidential Truth Commission on Suspicious Deaths, which tried to shed light on cases like Private Joo’s until it was disbanded last year.

The commission ruled that enormous stress had driven Private Joo to commit suicide. His father is now consulting with a lawyer on the possibility of filing a civil suit against the government.

Other families will have to do without the commission’s help. Established during the liberal Roh Moo-hyun administration in January 2006, the group was shut down under conservative President Lee Myung-bak in December. Only cases that occurred before 2006 fell under its official mandate, meaning there is now no central authority left to push the military to look deeper into “accidental” deaths.

Park investigated close to 600 cases from 2003 to 2008, and said that the closed nature of the military made his work very hard. “It’s an embedded culture that is almost impossible to remove. At every single step, it’s security this and security that. Peeling an onion is easier,” said Park. “If you have someone coming forward and coming clean, then that’s a very lucky break, but it happens on very rare occasions.”

Asked whether he thought some of the cases the military called suicide were actually homicide, the former official said it was “likely.”

“Usually, people don’t want to come forward because they want to move on with their lives and forget about what happened in the military,” said Park.

Because of this lack of progress, decades-old incidents continue to resonate. In February, the Seoul Central District Court ruled that the shooting death of a soldier was covered up as a suicide 26 years ago. In 1984, Heo Won-guen, then 22, was discovered dead at his military unit in Hwacheon with three bullets in his body from an M16 rifle. The military said at the time that Heo killed himself after being physically abused by the company commander. The Presidential Truth Commission on Suspicious Deaths later said that he was killed by a drunken superior. The court based its decision on the findings of the now-dissolved commission.

It ruled that higher-level military officers at Heo’s unit engineered the cover-up by cleaning the barracks and shooting Heo two more times in the chest a few hours after he was killed. The Defense Ministry has said it will file an appeal.

According to a study conducted in 2009 by the Korea Association of Criminal Psychology, between 1980 and 2005 a total of 10,970 people have died in the military from various causes, including 4,088 suicides.

Sin Gyeong-chul, a retired lieutenant colonel, argued that the military has improved. “Changes come slowly, but they come. There is a lot more transparency now in the military compared to the past,” he said.

The negative perception of the military is as much historical and emotional, according to Kim Eun-gi, a professor of sociology at Korea University. “The military has been always a symbol of suppression. Then you have a conscript-based military in which hazing activities occur and people remember those things when they get out,” said Kim. “Democracy is still young here, but bad memories go a long way.”

Along with the closed nature of the military, its emphasis on tight ideological control of its conscripts has only exacerbated the problem.

Last year, the Defense Ministry announced that it would forbid “seditious literature” in the military. The blacklist included Noam Chomsky’s “Year 501: The Conquest Continues,” which the military described as anti-government and anti-American. “Bad Samaritans,” a book by Chang Ha-joon, an economics professor at the University of Cambridge, which is critical of the global free market economy and uses Korea’s President Park Chung Hee as a case study, was also included. As soon as the ministry announced the list, sales of the banned books surged.

Six military legal officers filed a suit with the Constitutional Court arguing that the military’s regulations are unconstitutional. In return, they were reprimanded to various degrees, some even receiving dishonorable discharges, effectively preventing them from opening a private law practice despite their experience. Such a penalty also keeps them from being appointed as judges or prosecutors in civilian courts even if they pass the national bar exam. The Defense Ministry said the officers in question had violated military regulations that dictated absolute obedience, that their conduct was unbecoming, and that by violating the chain of command they had brought dishonor upon the military.

“I did expect to get some kind of punishment such as a suspension, but I didn’t think I would lose everything,” said Park Ji-ung, one of the discharged officers. “I thought that times had changed to such an extent that not everyone would play deaf.”

Park has passed the bar exam but cannot register as a lawyer. Last week, the Seoul District Court ruled that his discharge was legal and dismissed his lawsuit. He has appealed the court’s decision.

Of course, it hasn’t helped that in an age when developed countries have built armies of career-soldiers and volunteers, Korea still practices universal conscription, forcing Spartan-like living conditions on a generation that has grown up in relative comfort.

For most males, the 24 months of mandatory service are nothing but lost time. The highest rank enlisted men achieve, sergeant, pays roughly 100,000 won ($90.50) per month. Private companies have been cutting back on hiring advantages to men who complete their service as well.

Draft-dodging scandals involving athletes, entertainers and relatives of well-connected people have become an annual tradition. While military officials insist that hazing has disappeared and living conditions have improved, the public isn’t easily convinced.

“I know it’s his duty as a citizen, but if there is any legal way not to send my son to the military I would try,” said Kim Yun-mi, mother of a 19-year-old son. “The military is a necessity, but I don’t trust what it does.”