Although gone, their spirits live on

Although gone, their spirits live on 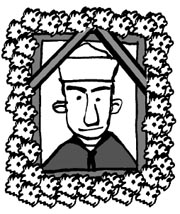 On Feb. 9, 1904, the imperial Japanese fleet, made up of six cruisers and three torpedo boats, opened fire on two Russian Navy ships off the coast of Chemulpo, present-day Incheon.

The Russians refused to surrender, even though they were far outnumbered. In the end, the Russian captains sank their own ships so that they would not fall into the hands of the Japanese.

Thirty-three Russians were killed and 97 wounded in what would become known as the opening battle of the Russo-Japanese War.

Koreans remember the fallen Russian sailors for their bravery in defending Korea against imperial Japan.

Children learn about the Battle of Chemulpo Bay in school, and a ceremony for the repose of the dead is held annually at sea where the battle was fought.

In 2004, a monument dedicated to Russian sailors who have died in battle was erected in Incheon.

The Korean Peninsula has seen many invaders and wars over the centuries. We honor those soldiers who sacrificed their lives for our freedom and safety with ceremonies held every year.

In October every year, ssitgimgut, a dance for the repose of the dead, is performed at Uldolmok in Munnae-myeon, Haenam County, South Jeolla. It is a ceremony held to remember the departed souls of the Joseon Dynasty (1392-1910) sailors who perished in battle against the invading Japanese navy.

In June, a dance for the repose of departed souls of unknown soldiers is performed at Bimok Valley, or the valley of the wooden cross, in Hwacheon County, Gangwon. The valley was a fierce battlefield during the Korean War.

Poets of all ages and countries have depicted brave warriors who sacrificed their lives on battlefields as heroes.

One of my favorites is by a poet of the state of Chu during the Warring States Period in China. He so eloquently mourns the soldiers who were killed in battle.

He writes: “You had genuine bravery and excellence in martial arts/ none dared to ignore you because you were steadfast and strong till the end/ although your body is dead, your spirit is strong/ you are the hero among all spirits.”

It has been raining all week, but endless lines of people have been coming to the outdoor mourning altars to pay tribute to the 46 fallen heroes of the naval ship Cheonan. We praise the sailors’ bravery and pray that their souls rest peacefully. We will carry the memory of those who defended our country in our hearts forever.

Although their bodies are dead, we know their spirits are strong. We know they are now protecting our waters and watching over our country.