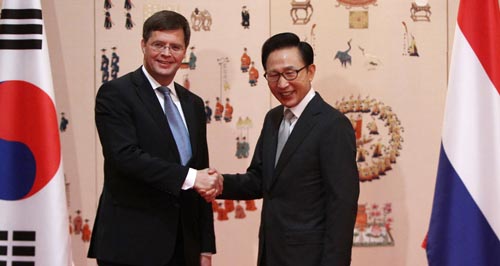 President Lee Myung-bak, right, and Dutch Prime Minister Jan Peter Balkenende, left, had a summit and luncheon at the Blue House yesterday, discussing a wide range of topics including investment and trade. By Cho Mun-gyu


Korea and the Netherlands have agreed to bolster their economic and environmental cooperation, and will speed up efforts to sign and ratify a Korea-European Union free trade agreement.

President Lee Myung-bak and Dutch Prime Minister Jan Peter Balkenende had a summit and luncheon at the Blue House yesterday, discussing topics including investment, trade, shipbuilding and climate change, as well as measures to cope with the global financial crisis, according to a press release by the Blue House.

“Noting that the Netherlands is the third-largest investor in Korea and Korea’s major trading partner, the two leaders agreed that the Korea-EU free trade agreement and the revised Korea-EU basic framework on bilateral relations will largely contribute to the bilateral relationship,” the press release said. “They agreed to work together to put the agreements into effect as early as possible.”

According to the Blue House, Balkenende also agreed that the Netherlands will participate in Korea’s Yeosu Expo in 2012.

The leaders also welcomed the signing of cooperation accords over Korea’s four rivers restoration project and the Saemangeum reclamation program. The two governments signed a memorandum of understanding on development and investment for the Saemangeum program. The Korea Water Resources Corporation and the Netherlands’ Deltares, a research institute for water, soil and subsurface issues, signed a technology cooperation pact for the four rivers program.