Choice picks from the festival program

Choice picks from the festival program

The Jeonju International Film Festival kicked off yesterday with 208 films in eight categories and 25 subcategories from 49 countries.

The nine-day festival, now in its 11th year, is one of the nation’s three major international film festivals.

To help readers navigate through the hundreds of films that will be screened in Jeonju, JIFF programmers have provided a list of their picks for what to watch.

“Should’ve Kissed,” “Carcasses,” “The Apple and the Worm,” “Amreeka” and “Vapor Trail (Clark)” are just five of the more than 200 films in the 11th Jeonju International Film Festival. Provided by the festival

The 40-year-old Park has not only directed the film but plays the leading man, Joon.

“Its experimental style and new format led us to choose this as our opening film,” said JIFF director Min Byung-lock at a recent press conference.

Park is a younger brother of Korean director Park Jin-pyo, who has made hit romantic dramas such as “You Are My Sunshine” (2005) and “Closer to Heaven” (2009).

The festival was scheduled to open with legendary director Im Kwon-taek’s 101st film “Scooping up the Moonlight,” a story about two people who make hanji, or traditional Korean paper, but the film’s production schedule failed to meet the JIFF deadline. 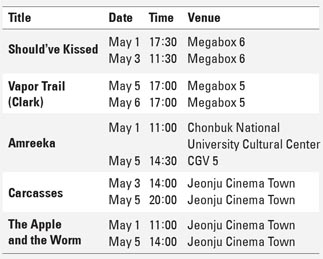 American filmmaker John Gianvito’s “Vapor Trail (Clark)” is the longest film in the festival, clocking in at more than four hours.

The film depicts the tragic lives of people living in the Philippines close to where U.S. military air base Unit Clark was once located. The toxic chemicals and waste emitted from the military base caused many women to give birth to disabled babies and families to lose their loved ones to cancer.

After the Sept. 11 attacks, the members of the Arab population in the United States were viewed with suspicion and treated as potential terrorists.

Against this backdrop, a single mother and her son move from Palestine to a small town in Amreeka, the Arabic pronunciation of America. The film depicts how the mother and son adjust to their new lives as immigrants in a new land.

“We have many films which deal with the [9/11] attacks from a Western point of view but ‘Amreeka’ is different. It is not uncomfortable,” said programmer Cho Ji-hun. “It’s a feel-good comedy.”

Director Cherien Dabis won the International Federation of Film Critics Prize at the 2009 Cannes Film Festival with this film, which is her first full-length feature. She is also well known for her work as a screenwriter for the hit American TV series “The L Word.”

Award-winning Canadian film director David Cote happened to meet an elderly man who collects scrapped cars and decided to base his latest film, which walks a fine line between fiction and nonfiction, on the man’s life.

“In the beginning, it is a documentary but the director inserts fictional elements into the later part. The film seems like a dreamy fairy tale,” said programmer Cho.

The title “Carcasses” refers to a car grave.

The Apple and the Worm

Danish animated film “The Apple and the Worm” is the story of an apple that dreams of being classified as “high quality” and does everything he can to make his dream come true, even if that includes hurting his apple friends.

Festival programmer Cho recommends the film for families with children and says it represents a rare opportunity to see an animated film from Denmark.