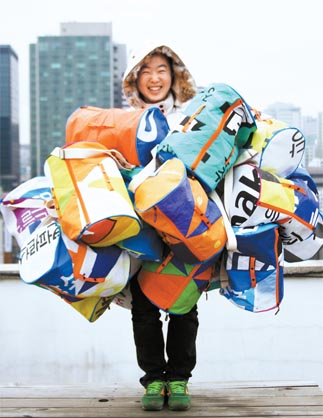 Touch 4 Good Co-president Lee Hwa-young holds some of the bags her company has made out of discarded advertising banners. Provided by Touch 4 Good

Plastic bags are a menace.

They’re made from expensive and increasingly scarce oil. They’re not biodegradable, dissolving into small parts that enter the food chain. They’re usually thrown away after one use, ending up at best in a landfill and at worst in massive floating continents of detritus like the Pacific Garbage Vortex.

Though solving the problem will be more complex than any quick fix, one measure that is gaining popularity and even a little fashion cachet is the “eco-bag.” Eco-bags are usually made of cloth and can be reused again and again. A-list actress Kim Hee-sun recently designed one, while Esquire, a local shoemaker, and the discount store chain E-Mart also make eco-bags. From those hoping to affect “green chic” to stores handing them out as promotional items at new branches, eco-bags are literally everywhere.

But there is criticism. Do people really use the bags again, or do they simply throw them in the closet? What about the extra resources it takes to produce the bags?

“If you look into the process of making an eco-bag, you will have to ask, are they real?” said Lee Jun-hee, one of four co-presidents at Touch 4 Good.

“In order to grow raw cotton, a vast amount of hazardous chemicals and pesticides are consumed, and carbon dioxide is emitted when transporting cotton from one place to another. Such processes cause pollution.”

Touch 4 Good collects donated used promotional banners like the one above, screens out those with significant wear or prominent brand names and sews the rest into reusable shopping bags. Provided by Touch 4 Good

Lee and her three peers - Park Mi-hyun, Lee Hwa-young and Park In-hee - first met at a workshop designed to nurture venture companies specializing in social responsibility. During the last week of the event, students were given time to think about actual business models, and one of the four blurted out “Where do all those banners go?” referring to the advertising and ceremonial banners used here. In October 2008, Touch 4 Good got started. Its big idea: making eco-bags from those old banners.

“Banners are used for a certain period and then they are abandoned, but people carry bags every day. We believed making bags out of those ubiquitous banners might make people aware of environmental issues in a natural way,” said Lee.

Since most banners are rain-proof, they’re perfect for the raw material for bags. But the process is not that simple, Lee explains.

Among many banners donated by government organizations and other institutions, Touch 4 Good picks the ones which are not too worn out and don’t bear certain brand names. The selected banners are washed with eco-friendly detergent and cut into pieces, then sewn together again, ready for reuse.

Another eco-bag maker, Eco Party Mearry, uses discarded banners and clothes to craft their wares, which also include stuffed dolls and even pencil cases. Launched in May 2006, the company, run by the Beautiful Foundation, was the first to attempt to recycle old clothes and banners in Korea.

The foundation’s best-known project is the Beautiful Store, a nationwide chain selling secondhand clothes and everyday items. Not all donated clothes go on sale at the Beautiful Store, since some are too old or worn-out, and that was the genesis of Eco Party Mearry, said company official Hwang Yong-woon.

“During the process [of collecting secondhand clothes], heaps of clothes were discarded. So the foundation thought we had to do something with these,” Hwang said.

An abandoned sofa might be made into stylish leather bags, a pile of newspapers into dozens of pencils or colorful children’s T-shirts into a cute stuffed gorilla. Many of Eco Party Mearry’s products sell out quickly after their release. About 60 different items are available at its online and two offline stores. 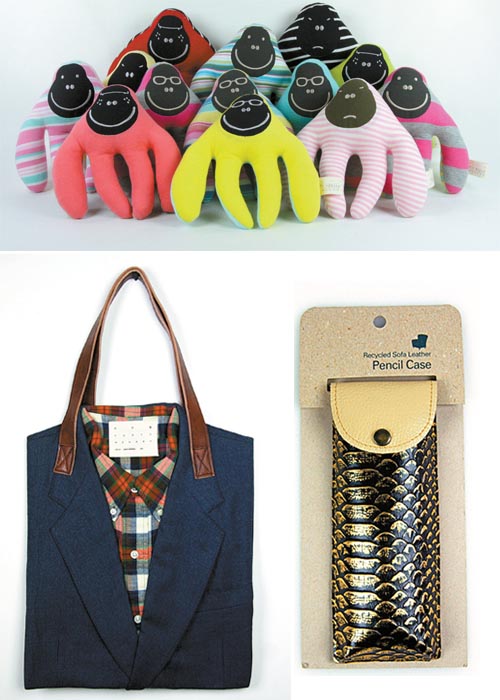 Used clothing, furniture and other materials that can’t be sold at the Beautiful Foundation’s chain of Beautiful Store secondhand shops are made by affiliate Eco Party Mearry into stuffed gorillas, above, bags, left and even pencil cases, right. Provided by Eco Party Mearry

Hwang said the company’s goal is to make its lineup appealing without relying on that warm, fuzzy earth-friendly feeling to sell.

“We can’t force people to buy ugly recycled products just because they are good for the environment. So we focused on the design and practicality of the products,” said Hwang.

The company’s years of effort were recently acknowledged by the Museum of Modern Art in New York, which exhibits cutting-edge designs. Some of Mearry’s recycled bags and dolls were put on display at the museum last year.

About 20 people work at the firm’s Seongsu-dong office, which also serves the role of factory and warehouse. Despite its success, Hwang said Eco Party Mearry is struggling to make ends meet.

“The thing is, we can’t mass-produce these products. But if we succeed in mass production, I think we could lower prices and sell more.

“I hope we can reduce waste at least in Seoul and start mass-producing within this year.”