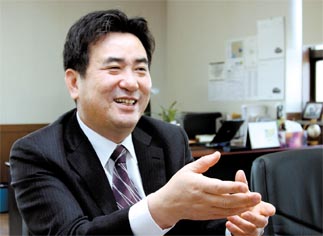 When you think of a navigation system, you may picture a screen on a vehicle dashboard that does nothing but order the driver in a robotic monotone to “turn right at the next intersection.” But Korea’s “navi” industry has freed itself from the confines of the car. Today’s devices provide services for pedestrians, trekkers, bike riders, smartphone users - even those just looking for popular restaurants, clubs or festivals taking place nearby, according to Justine Park, chief executive of M&Soft, Korea’s largest navigation software developer.

M&Soft has a dominating 59 percent share of Korea’s auto navigation software market, with its signature software - Mappy and Gini - installed on 3.86 million navigation devices so far. But it also boasts the top share - 15 percent - of new sales in the Asia-Pacific region in 2009, according to market researcher Canalys. Park, 50, a former engineer for local machinery maker Mando, sat down with the JoongAng Daily to talk about the company’s success and plans.

Q. Tell us how M&Soft was born and its current status.

A. Some of the employees here started at the research center at Mando Machinery in the mid-1990s. Back then, even the Korean government had little digital data on the country’s geography, though the technology was thriving in Japan. Some Mando executives thought the car navigation business would grow someday and invested about 6 billion won ($5.4 million) in the project. But it met with a deadlock in the wake of the 1997-98 Asian financial crisis. So 13 researchers, me included, spun off the unit and continued the research on logistics and transportation network databases based on previous studies. The industry started to expand in earnest in 2004 and experienced whirlwind growth since 2005 [when the company became a Hyundai Motor Group subsidiary].

Ironically, we had the biggest market share in the Asia-Pacific market because Korea’s market share in the region is so large, accounting for nearly 50 percent of the market. Currently about 2 million auto navigation systems are sold in Korea every year, behind Japan where about 3.5 million systems are sold. China is far behind, selling about 1 million devices every year, while in Thailand about 100,000 units are sold a year.

Since we do business not just in Korea but also elsewhere in Asia like Thailand and Malaysia, we ended up with a bigger share. No other Korean navigation software company has yet branched out in Southeast Asia.

What are your strategies for overseas operations?

Europe and North America are already crowded with existing players. So our major target for now is Southeast Asia, then we might think about going to Russia or Latin America later. Navigation software is developed based on each country’s social and cultural preferences, so it takes some time to get a foothold in each market. For instance, the most-searched location among Chinese consumers is government offices, while Koreans mostly look for good restaurants and Thai consumers search for tourist attractions. Meanwhile, it is essential for Muslim consumers to find the direction of Mecca for daily prayers. Also, unlike the Korean market where navigation software in all different price ranges is available, in Southeast Asia most products are either extremely expensive, upscale ones or completely budget-priced with few in between. Filling this unexplored area of mid-range products will be another challenge. We have entered the U.S. market by having our software installed in Hyundai cars. But we’re operating independently in the Southeast Asian market and for about 50 percent of our Chinese sales.

What do you think will drive your future growth?

When the auto navigation industry first started off, our first priority was having our software installed in as many devices as possible. But now we’re keener to offer additional content based on the software we have sold, and possibly running ads along with add-on content to gain revenue. That means navigation owners will be able to use it not just for directions to a particular address but also for a more customized map service of hot new restaurants, cafes, music festivals and other events that might interest them.

Our iPhone application, for instance, is basically a map combined with social networking sites, like a Twitter map. Users can update their latest locations on the digital map, or mark a certain spot and attach their reviews of the place, so that their friends can go there later and check it out themselves.

So navi software is making its way onto devices like smartphones.

Yes. But developing the software for smartphones is a whole new challenge. Since the screen is far smaller, the visuals should be simpler, and there is more focus on location-based content than displaying maps or giving directions. Our Mappy navigation software for Samsung Electronics’ Omnia smartphone is purely an auto navigation system, while the iPhone app is more of a content-based map service. The navi software for Android is currently under development, with the goal to roll it out in August.