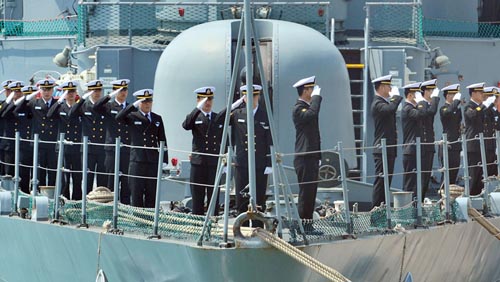 Navy sailors make military salutes on a battleship yesterday as the Cheonan funeral procession passes by the dock, bidding farewell to their fallen fellow sailors at the Second Fleet Command in Pyeongtaek, Gyeonggi. [Joint Press Corps]


South Korea spent the month of April mourning the loss of lives from the Cheonan sinking. May is scheduled to be about diplomatic efforts to prepare for responses if North Korea is found to be behind the tragedy.

Blue House spokesman Park Sun-kyoo said yesterday the Cheonan incident is not an item on the two leaders’ agenda, but since the Chinese government is interested in the development, Lee and Hu would likely discuss the sinking.

South Korea has said taking the Cheonan incident to the United Nations Security Council is an option if the investigation points to North Korea as the culprit. And China, traditionally an ally of North Korea, is an important variable. It is one of five veto-wielding permanent members of the Security Council, which also includes the United States, Britain, France and Russia.

A binding resolution that would include sanctions requires unanimity from the Security Council.

Zhang was making his first visit since he was posted here last month. After about 30 minutes of talks with other officials in attendance, Yu and Zhang met alone for another 15 minutes.

A tripartite meeting of foreign ministers of South Korea, China and Japan is set for mid-May and a summit of leaders from these three countries could take place late next month. 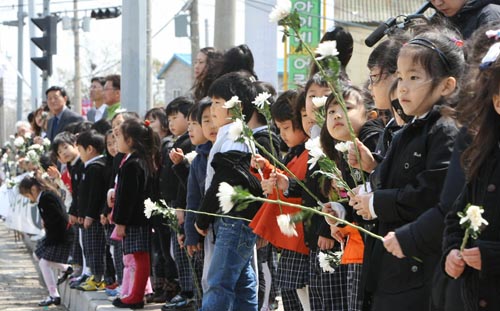 Also Wednesday, South Korean Foreign Ministry officials said Seoul would consult with China and Russia before referring the Cheonan to the Security Council.

Konstantin Vnukov, the Russian ambassador to Seoul, made a quiet visit to the Foreign Ministry here and was briefed about the ongoing Cheonan investigation and South Korea’s future plans, a diplomatic source said yesterday.

Citing a North Korean source, the report said the North’s West Sea Fleet and the Fourth Army Corps were ordered to reinforce their units and to stay ready for combat. The report added the source spoke to military officials from each of the units but didn’t describe how long the combat readiness status remained, or exactly what the soldiers did.

Ships from the West Sea Fleet exchanged fire with the South Korean Navy in the two battles near Yeonpyeong Island in 1999 and 2002, and another battle near Daecheong Island last year.

The Fourth Army Corps is based closer to the border than any other North Korean army units in the west, and is led by Kim Kyok-sik, former chief of the military’s general staff and a close aide to Kim Jong-il.