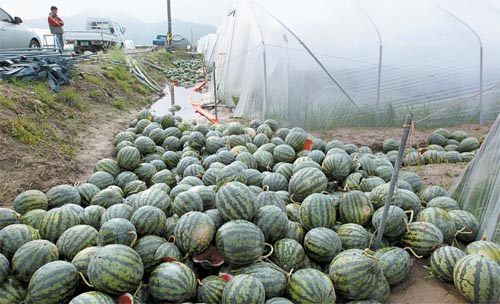 Discarded watermelons ruined by the unusually cold weather and lack of sunshine are piled next to a greenhouse in Haman, South Gyeongsang, while rain drizzles on Wednesday. [YONHAP]


Baby, it’s cold outside. And that’s why you’re spending more at the fruit, vegetable and fish markets.

Although the temperature yesterday was up a bit, Thursday’s high in Seoul, 7.8 degrees Celsius (46 degrees Fahrenheit), was a record low for that date. The previous record for a cold day in April was 10.1 degrees in 1962.

It even snowed in Gangwon yesterday.

The Korea Meteorological Administration said the recent temperature drop was largely due to cold air (below 30 degrees Celsius) blowing in from Siberia, and that temperatures will likely return to normal levels by this weekend.

“In more than 30 years of harvesting I haven’t seen anything like it, and we’ve been through numerous natural disasters like storms and hail,” said Kim Joong-bong, 51, a persimmon and pear farmer who represents the farming community in Sangju, North Gyeongsang. According to the Korea Advanced Farmers Federation, North Gyeonsgang is the area most affected by the recent cold snap.

“Some of the pear farms have suffered tremendously,” said Kim, “with more than 90 percent of their trees dying.”

According to the Ministry of Food, Agriculture, Forestry and Fisheries, damage to onion and Korean black raspberry crops in March totaled 2.6 billion won ($2.3 million). More damage estimates will be made in May.

“It’s hard to tell how much of the agricultural goods have been affected by the recent temperature drop since we need to wait until the flowers blossom,” said an official with the agriculture ministry, requesting anonymity. “But one thing for sure is that the damage will be enormous compared to previous years.” Farmers have been having trouble with bad weather and lack of sunshine since last December.

Crop damage and poor yields have led to skyrocketing prices, as the accompanying chart shows. Fish prices are affected, too, because fish are sensitive to changes in water temperature.

However, some industries are benefiting from the freaky weather.

Lotte Department Store said 50 percent of its stock of clothing worn in both winter and spring have sold in just 20 days of being put on sale, and 65 percent of its down jackets. Leather jackets are hot sellers, although they’re normally off the shelves by now. Spring lines aren’t selling well at all.

The agriculture ministry said it will provide 156.7 billion won as subsidies and loan for farms damaged by the endless winter, and provide special loans worth 190 billion won from its disaster emergency management budget.