A violin great returns after 5 years

A violin great returns after 5 years 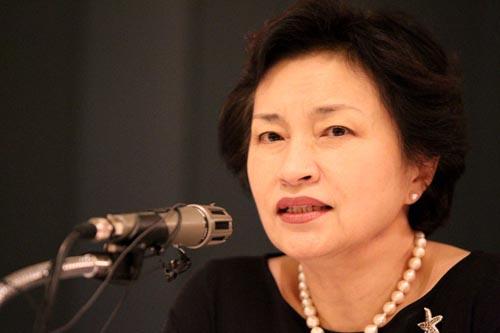 Breaking a five-year hiatus, veteran violinist Kyung-wha Chung, once dubbed “Asia’s witch” for her passionate performances and impeccable technique, is set to take the stage in Seoul tomorrow with London’s Philharmonia Orchestra.

Under the baton of conductor Vladimir Ashkenazy, Chung will play Brahms’ Violin Concerto in D minor. She said in a press conference last week the piece is the “pinnacle of the violin repertoire.” She has been playing it since she was 15.

Chung was forced to leave the stage in 2005 when she injured her finger while practicing for a concert in Seoul, where she was to play the same Brahms concerto.

“Since I haven’t performed for a while, I am not that confident about how well I can play. But that I can share my music with audiences seems like a miracle,” she said at the press conference.

Despite her uncertainty, the 62-year-old violinist was beaming.

“Taking a break helped me progress as an artist, and I made even more progress than I would have if I had continued performing during that time,” she said.

“I was always dissatisfied with my performances in my 20s because I was obsessed with perfecting my technique,” she continued. “But after so many years, I find myself extremely grateful for still being able to play.”

Chung is a member of the Chung Trio, which includes her brother, conductor-pianist Myung-whun Chung, and sister, cellist Myung-wha Chung.

The violinist gained international acclaim at age 19 when she won first prize in the distinguished violin competition sponsored by the Leventritt Foundation in 1967, sharing the honor with Pinchas Zukerman. In 1970, she released her debut album with Decca Records, becoming the first Korean classical musician to sign with the global music label. She has been teaching at the Julliard School of Music, her alma mater, since 2007.

Asked about her teaching experience, she said, “There are people who are born with the gift of teaching, but I don’t think I’m one of them. Rather than focusing on theoretical elements, I try to share my experience as a performer and to help my students psychologically,” she said.

Counted among the first generation of Korean musical prodigies who made a name for themselves on the global stage, Chung asserted the importance of providing financial aid to fledgling musicians. To this end she established a private foundation in her name last September. Its main goal is providing instruments to budding performers, both Korean and international, as well as the financial support to help them manage their careers.

It was while she was teaching that she realized the importance of supporting young artists so that concerns about money would not become a barrier to their studies.

“Korea is being recognized worldwide for its talented classical musicians and supporting them is totally possible. But the idea of [offering them funding] doesn’t seem to have been established in Korean society yet and I want to help raise awareness about this need,” she said.

She cited the Nippon Music Foundation as a good model for Korean funding organizations.

The Japanese foundation runs a string instrument rental program for internationally-accomplished artists. It has “21 Stradivarius violins which were bought at $90 million and are now worth $200 million. It’s also a very good investment opportunity!” she said.