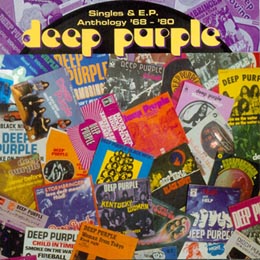 Perhaps to the disappointment of its fans, Deep Purple’s two-CD set, “Singles and E.P. Anthology ’68-’80,” doesn’t offer anything new, aside from a couple of outtakes from decades ago.

But it does give you almost all (yes, almost) of the band’s signature tunes in their original form, along with alternate takes and live versions. It’s a nice treat for fans in Korea who are anticipating Deep Purple’s upcoming concert on May 18 in Seoul.

The track listing includes the band’s first U.S. hit single, “Hush,” the single edit and live version of the hard rock classic “Smoke on the Water,” and the wacky, piano version of the driving rock single “Speed King.” The groovy “Black Night” and ballad “When a Blind Man Cries” should bring back memories for long-time fans, too. Going into the details of each track would be an insult to hard rock connoisseurs.

One downside, though: no “Highway Star” here. It was never released as a single. But who knows, Deep Purple may play it at their show.