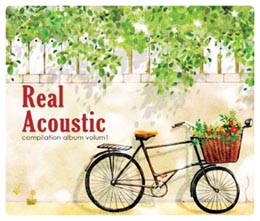 Club Evans, one of the nation’s oldest venues for jazz, launched a small record label in 2007 for talented yet lesser-known musicians popular on the club circuit in the area around Hongik University. The “Real Acoustic” album is the label’s sixth, and it consists of tracks by nine solo artists or bands.

My first impression of the album was mediocre, to be honest: The songs were far from charismatic, hardly developing into the catchy climax that makes you want to hum afterward. But you can never judge an album based on your first listen. The second time I put the album on, the true qualities of the songs came through. Listening to the songs was kind of like eating a plain homemade biscuit - it’s composed of simple ingredients but gets tastier as you chew. And that’s a good indication of just how different indie music is from the easily addictive yet quickly tiresome sound of mass-produced K-pop songs.

The songs themselves are ballads with a folk influence. The first track, “Sleep,” by the band Strange Curtain, is a lyrical number with a beautiful melodic flow. “Summer of That Year” by Nabbunsun creates a unique, dream-like mood by combining an acoustic sound with electronic effects.