Heartfelt poems to mourn the dead

Heartfelt poems to mourn the dead 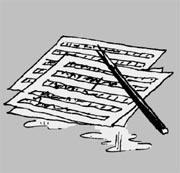 Some people write poems to express their grief after they have lost someone they loved. These poems are songs by the living people for those they have to bury.

It was common during the Joseon Dynasty (1392-1910) to write poems for the dead. When a prominent person died, mourners wrote poems and such poems piled up in front of the dead person’s house.

The saddest of these remembrance poems were the ones written by parents who lost their beloved children.

“You will not be able to mourn when I die./ Here I cry because you are gone./ What good will this crying do/ When father and son are painfully split?”

On the son’s birthday the following year, Kim cried once again.

“Today last year, I played with you./ Today this year, there is not even a trace of you. ”

The poem appears in a book titled “Tears of People in Old Days” by Jeon Song-yeol.

We can find similar poems in modern times as well. In the poem “The Glass Window,” Chung Ji-yong describes how he lost his young child to pneumonia: “With your delicate small veins in the lungs burst/ You flew away like a little bird.”

The Korean modernism poet Kim Kwang-su wrote the poem “The Silver Spoon and Chopsticks” after he lost his son.

“The mountain goes down/ The sunset gets drowned./ The little child is not at the dinner table./ On the cushion where the child used to sit, lies a silver spoon and chopsticks instead./ At the end of the spoon tears are welled up.”

The poem continues later, “The child is tottering in a distance on the field./ The barefooted child is crying./ I call him but he does not answer.”

The grief that one feels after losing one’s child must be overwhelming. Zi-xia, a disciple of Confucius, was so sad after he lost his child that he became blind.

The Korean writer Chung Do-sang even wrote “My son left only a short death note and he created a precipice in my chest.”

After his young teenage son took his own life, the father published a novel titled “The Camel” where he travelled across the Gobi Desert with the soul of his son.

One can’t imagine how it must be to go on living while constantly feeling a precipice in one’s chest.

The funeral for the 46 sailors of the Navy ship Cheonan was observed last week. Each of those sailors were someone’s husbands, brothers, nephews or sons.

On April 29, the JoongAng Ilbo published a poem written by the parents of the late Petty Officer Third Class Cho Ji-hun.

“Become the sun./ The sun never goes away but it goes up every morning./ Become a bird and fly high. Come flying home to us.”

Cho’s parents wrote this poem with a heart heavy with grief, a paper soaked with tears.