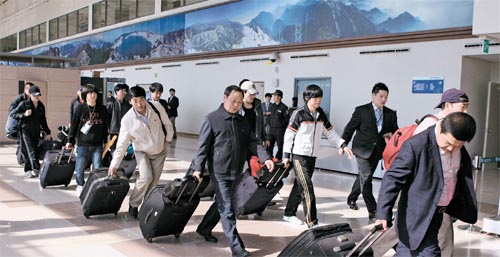 Hyundai Asan workers return from the Mount Kumgang resort yesterday in the wake of North Korea’s decision to eject most of the staff of the South Korean company. More are expected to cross the border today. [YONHAP]


Dozens of Hyundai Asan workers crossed the eastern inter-Korean border yesterday afternoon and more will return today in the wake of North Korea’s decision to kick out most of the staff of the South Korean companies remaining at the Mount Kumgang resort.

According to Hyundai Asan, one of the largest South Korean investors in the North and the operator of the joint tourism project in the scenic mountain resort, 37 ethnic Koreans from China, who have been employed at the resort as maintenance workers under short-term contract, were scheduled to cross the military demarcation line around 3:30 p.m. yesterday. Another group of 23 South Korean workers will arrive this morning, the company said.

Their return follows the North’s order last week to expel all but 16 of the nearly 100 workers at the resort by today. The remaining 16 are from Hyundai Asan and Emerson Pacific Group, which has been building golf courses at Mount Kumgang.

Once called the symbol of reconciliation between the two Koreas, Hyundai Asan’s tour program to Mount Kumgang began more than a decade ago. The idea of the project was born when Hyundai Chairman Chung Ju-yung made a historic visit to Pyongyang in January 1989. Nine years later, his son Chung Mong-hun announced a deal with North Korea, and the Kim Dae-jung administration approved the project months later. The first batch of South Korean tourists left for the scenic mountain resort on Nov. 18, 1998, using a sea route.

Since then, Hyundai Asan has made continuous investments in the project. The tours started as simple excursions, and there were no lodges during the initial period. South Korean tourists traveled to the North by ship, briefly trekked the mountain during daytime, then returned to the ship in the evening because the North’s reclusive regime did not want the tourists to interact with the locals.

The tours began to significantly evolve when South Korean tourists began to use overland routes in 2003, traveling to the mountain by bus and train. Hyundai increased its investments and began to build more facilities in the resort area, including hotels, restaurants and shopping centers, and the venue served as a site for tearful reunions of families separated by the 1950-53 Korean War.

From 1998 to July 2008, about two million tourists visited Mount Kumgang.

The program, however, was brought to a critical juncture on July 11, 2008, when South Korean tourist Park Wang-ja was shot to death by a North Korean soldier during her stay at the resort. The Lee Myung-bak administration shut down the tours, demanding a joint investigation of her death, but Pyongyang resisted. Since then, the two Koreas have failed to agree on terms for the resumption of the tours.

According to Hyundai Asan, it has spent 226.9 billion won ($204.6 million) to build hotels, a harbor, power generation facility and roads since November 1998. The company also paid another $486 million to Pyongyang for the exclusive right to operate the tours and resort.

Other investors, including Emerson, the Korea Tourism Organization and the National Agricultural Cooperative Federation’s banking branch, spent 133 billion won to build a golf course, spa and a bathhouse at the resort’s hot springs and a theater for cultural performances.

Since the tour program was shut down in July 2008, Hyundai Asan has lost an estimated 257.9 billion won from the operation.

To stay afloat, the company took emergency measures that included a massive layoff that reduced the number of workers from 1,084 to 387.

The government is only able to cover a fraction of the snowballing losses suffered by South Korean companies that invested in Kumgang.

Inter-Korean economic cooperation business insurance offered by the Export-Import Bank of Korea would have covered up to 7 billion won of the damages resulting from the asset freeze, but among the South Korean investors, only the National Agricultural Cooperative Federation had purchased the policy.

The other companies, whose investments far exceeded the compensation limit, had not bought the insurance.

According to the Unification Ministry, the government made loans amounting to 7 billion won to Hyundai Asan’s small business partners in January 2009 to keep the companies afloat while the tours were suspended.

The loans were due in January 2010, but the government has extended them, the ministry said.

A Unification Ministry official said the government is looking into what it can do to assist the companies, although Seoul will not guarantee the properties frozen by Pyongyang.

One possibility is providing loans to cover the South Korean investors’ losses, but no final decision has been made.

An expert on inter-Korean economic exchanges estimated that South Korea’s losses from the shutdown of the Mount Kumgang tours would reach more than 1.84 trillion won, or about $1.67 billion.

Speaking at a forum last Wednesday, Kim Young-yoon - the head of the Korea Logistics Forum, a think tank devoted to the two Koreas’ economic exchanges - said not only Hyundai Asan and other investors, but also the local economy of Goseong County, Gangwon, where tourists gathered before crossing the inter-Korean border, will be greatly affected by the shutdown.

He said that since tourists stopped bringing money into the local economy, Goseong County has lost about 1.36 billion won a month.

Kim estimated that South Korean private companies including Hyundai Asan invested a total of 359.3 billion won, while the government spent another 4.86 billion won to build a fire station and pave the roads at the resort.

He urged both governments to engage in a dialogue to resolve the situation that is hurting both sides.