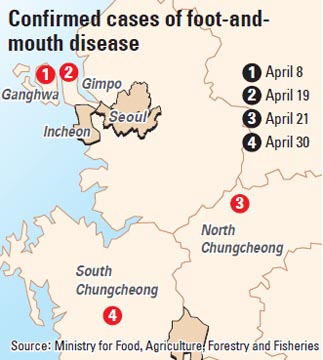 Fears about foot-and-mouth disease are spreading as the fatal animal epidemic penetrated into a state-managed livestock research institute in central Korea on Saturday.

The news that the contagion has hit a state-run livestock organization for the first time has raised doubts about the government’s quarantine system and its ability to deal with the disease. As the alarm grows, provinces in the south are gearing up to guard against a possible attack.

The government confirmed the presence of foot-and-mouth at the livestock and veterinary science institute in Cheongyang, South Chungcheong, on Saturday. It is the 10th outbreak of the disease since April 8.

One hog tested positive and around 1,600 livestock raised for research purposes at the institute - 321 cattle and 1,278 hogs - have been exposed to the virus, the Agriculture Ministry said.

In the weeks since foot-and-mouth broke out in Ganghwa, Incheon, last month, authorities have been struggling to come up with an epidemiological analysis, including the route of infection.

With few answers, the latest report has sparked fears of a full-scale inland epidemic. The first inland case was discovered at Chungju, North Chung-cheong, 96 kilometers (60 miles) northeast of the research institute, on April 21. It was the eighth case since the outbreak began.

On Saturday, three farms in Yeoncheon in Gyeonggi, Danyang in North Chungcheong and Yesan in South Chungcheong reported that their cattle were displaying worrying symptoms. Tests ruled out the presence of foot-and-mouth.

“We’re relieved that the tests were negative, but we are fully alert to the possibility that the disease has spread inland,” said an official of the ministry.

In addition to the exposed animals, authorities culled another 3,600 animals raised for research purposes, as well as 200 animals raised at farms within 500 meters (1,640) feet of the research institute, they said.

Since the first outbreak, the government has culled around 43,000 animals, incurring compensation costs of more than 55 billion won ($49 million). The previous record-high cost of foot-and-mouth was 53.1 billion won in 2002.

Neighboring regions and the southern provinces and cities are increasing efforts to keep the disease from spreading into their regions.

Daejeon, near South Chungcheong, said it has established four emergency quarantine posts to keep contaminated livestock or meat from entering the city. South Gyeongsang has asked its citizens to curtail visits to areas affected by the outbreak.