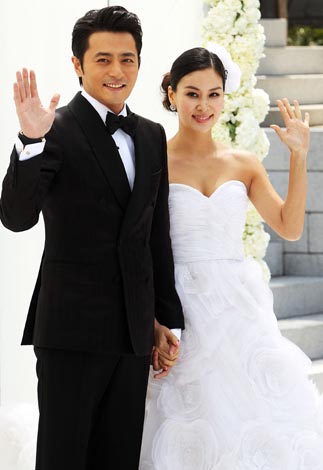 The private ceremony began at 5 p.m. As 550 invited celebrities and friends gathered to congratulate the couple, more than 1,000 international and local fans and 300 journalists swarmed the hotel to take pictures of “Jang-Ko,” the nickname bestowed by their fans after the paparazzi dubbed Hollywood bigshots Brad Pitt and Angelina Jolie, “Brangelina.”

Cameras flashed like lightning bugs when Jang and Ko appeared holding hands at a press conference at 2:30 p.m. in front of the hotel’s Yeong Bin Gwan guesthouse.

“The day before the wedding we were saying that it still doesn’t feel real that we’re actually getting married today,” Jang told the media before the ceremony.

“But standing here makes me feel like I’m getting married, and I feel nervous at the same time.” 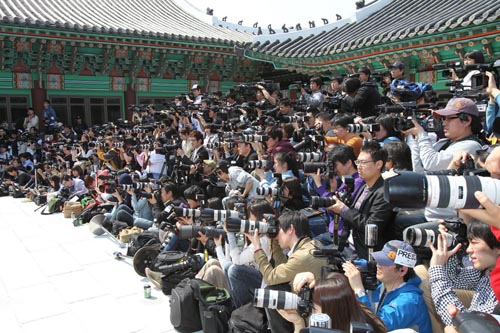 Film stars Jang Dong-gun and Ko So-young, above, wave at a pack of media who crowded the Hotel Shilla in Jangchung-dong, central Seoul, yesterday before their wedding ceremony. The couple will honeymoon in Bali. [YONHAP]

Ko wore an Oscar de la Renta gown by Soyoo, and Jang wore a Tom Ford tuxedo that cost more than 20 million won ($18,066), according to the Ilgan Sports newspaper.

The total cost of the wedding, including the couple’s Chopard wedding rings, was estimated at 178 million won.

Jang and Ko first met in 1999 when they co-starred in the movie “Love Wind, Love Song” and became friends.

The couple, both of whom are 38 years old, announced in November that they had been dating for two years.

“We went to a hospital a few days ago and we were told our baby is healthy,” Jang said.

“We don’t know whether the baby is a girl or a boy, but I hope the baby will be a beautiful daughter that resembles Ko So-young,” he said, smiling brightly.

Former Culture Minister Lee O-young officiated the couple’s wedding and actor Park Jung-hoon served as the M.C. Lee is the father of director Lee Sngmoo, who helmed “The Warrior’s Way,” starring Jang and American actress Kate Bosworth. The film is expected to land in movie theaters in the United States and Korea this fall.

Jang-Ko will leave today for Bali, Indonesia, where they will spend their honeymoon.