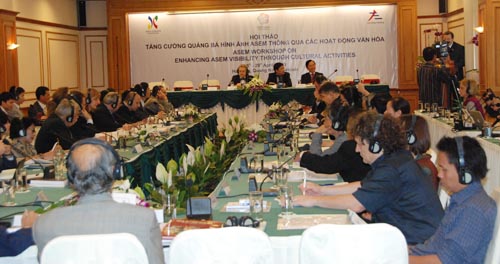 The Asia Europe Meeting (ASEM) workshop - which was initiated by the countries of Vietnam, Hungary and Italy and the Asia-Europe Foundation (ASEF) - was held at the Ha Long Plaza Hotel from April 28 to 29 and involved approximately 112 participants from eight European and 10 Asian countries, including Italy, Britain, Korea, Vietnam and China.

“Because of the role culture plays in today’s societies, coordination between the ministries of culture, education, foreign affairs and other relevant ministries should be enhanced to identify possibilities for collaboration,” said Dominique Girard, executive director of the Asia-Europe Foundation.

Topics discussed in the two-day long workshop included cultural diplomacy within the ASEM framework; the role of civil society in cultural dialogue; and enhancing ASEM’s visibility through cultural channels.

At the end of the workshop, ASEM participants offered their recommendations on how the group should proceed. These included: easing administrative and regulatory obstacles to facilitate the mobility of artists, support the establishment of networks of Asian arts professionals in order to facilitate balanced exchange between Asia and Europe.

Only one official from the Korean National Commission for Unesco attended the workshop. No government officials from Korea’s Culture Ministry were present.

“In Asia, there aren’t many who have the financial and human resource infrastructure to do this job,” Verstraete said. “We feel that this would be a way for the Korean government to gain visibility through the ASEM network. If they were to come here, it would deepen our relationship.”

Verstraete suggested that one of the ways for Korea to connect to Asia and Europe would be to link to ASEF’s culture360.org Web site, which is used by arts professionals to exchange ideas across cultural communities in Asia and Europe.

“Where can European people get information about Korean cultural policy in English other than through the Web site of Korea’s Culture Ministry?” Verstraete asked.

Judith Staines, a freelance consultant based in the United Kingdom who has visited Korea on cultural exchange programs, said Korea can take the lead in ASEM both as a bridge between Asia and Europe and within Asia.

“Korea is very well connected internationally,” Staines said. “There are lots of cultural exchanges and performances showcasing Korean artists and companies abroad. And through [the Korean Culture Ministry’s] Asia Hub City Project in Gwangju, Korea has really good culture management skills and also a fine profile in terms of the quality of its contemporary artists as well as a respect for its heritage.”

She said the Korean branch of Unesco is planning to conduct a study on the cultural policies of Asian nations. During the meeting, she learned that the Asia-Europe Foundation, the facilitator of ASEM, was planning to initiate similar project and the two organizations decided to move forward together.

Outcomes discussed at the meeting will be submitted to the fourth ASEM Culture Ministers’ Meeting in Poland in September and the eighth ASEM Summit in October this year in Belgium.