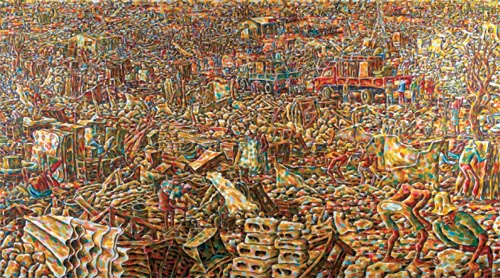 “Tsunami in Mbare Msika” by Lovemore Kambudzi (oil on canvas, 2006) is one of dozens of pieces featured in “The Modern Art of Zimbabwe” exhibition at the Korean Foundation Cultural Center through next week. Provided by the organizer


Local football fans are already gearing up for the 2010 World Cup in South Africa next month, which has enhanced public awareness of Africa in Korea. But the history between the two countries is not extensive and there have not been many exchanges between Korea and African nations in the past. That has left many Koreans without a strong understanding of the countries on the African continent.

But last year, President Lee Myung-bak made a pledge to increase economic and cultural cooperation with Africa, declaring that 2010 would be the year Korea would strengthen diplomatic ties with African nations.

The exhibition entitled “Modern Art of Zimbabwe,” which opens today in Seoul, aims to add a new layer of understanding to Korean residents’ understanding of the country.

The exhibition, co-organized by the Korea Foundation and the Korean Association of African Studies, displays about 90 pieces of art, including paintings, sculpture and pottery, allowing the viewers a great opportunity to appreciate what modern African art has to offer.

“The art of Zimbabwe, which is well known for its Shona Sculpture, has not only given artistic inspiration to great masters of Western art, it has also had a growing influence on contemporary art and sculpture,” Sim Ui-sup, the president of the Korean Association of African Studies, said.

The Czech ambassador said he fell in love with Zimbabwe and its art, particularly its stone sculptures, from his first encounter with it.

“I can still vividly recall the strong emotions I felt during my first visit to Zimbabwe in 1994. The monumental stone ruins of great Zimbabwe were transfixed in my mind, together with the beauty of modern stone sculptures, which were everywhere around me,” said Olsa, who served as the ambassador to several African countries, including Zimbabwe, from 2000 to 2006.

During his six years in Africa, Olsa said he became deeply involved in the Zimbabwean art scene, spending a lot of time meeting with Zimbabwean artists and collecting a number of art pieces.

Heinsbroek also has a strong connection to Africa, having served at diplomatic posts in Zimbabwe and other African countries from 2002 to 2006.

“I hope that the audience will enjoy the Zimbabwean art we are putting on display at this special exhibition and that they will be able to feel some of the passion and hardship under which it was created,” Heinsbroek said, referring to the economic hardship and political oppression under which Zimbabwean artists created their work.

*The Modern Art of Zimbabwe exhibit runs until May 14 at the Korea Foundation Cultural Center in Sunhwa-dong, Jung District, central Seoul. Go to City Hall Station, line No. 2, exit 9. Admission is free.

The Czech ambassador will give a lecture on the “History of Zimbabwean Stone Sculpture” on May 6 at 7 p.m.