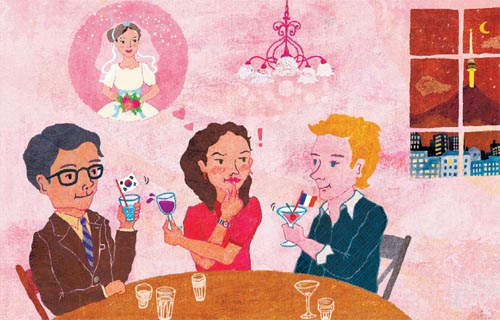 Koo, a 29-year-old office worker in Sydney, has been in a relationship with the Australian man she met there a year ago, and the couple plans to tie the knot in the next two years.

Born and educated in Seoul, Koo, who asked not to be named, went to the Land Down Under to get her master’s degree in accounting in her late 20s and then got a job at a local firm.

“I was upset about Korean men making chauvinistic remarks, that women are supposed to be coy and kind and that it’s even better if [a potential marriage partner] is younger, pretty and knows how to cook,” she said via e-mail. “ I have never heard the foreigners I’ve dated say such things.”

The men she is talking about sound as though they are straight from the dark ages. But there is still a considerable portion of Korean men, even those in their 20s and 30s, who think that way, according to the Korean bachelorettes interviewed for this article. Many of these women - who have lived overseas, are well-educated and have good jobs - have opted to find husbands among non-Koreans, who they think are more open-minded and respectful of women than their Korean counterparts.

Kim, who works at a domestic publishing firm and asked not to be named, also belongs to that group of women. The 32-year-old Kim recently became engaged to a European man who is an executive at a Seoul-based financial company. She says she is happier than ever with her fiance, but her confession of the relationship to her parents last year aroused fierce opposition from them because her boyfriend is a foreigner and therefore not a suitable match in their eyes. Her parents, both from Gyeongsang, one of the most conservative regions in the nation, went so far as to kick her out of their house because she refused to break up with her boyfriend. Her parents think it is a huge disgrace for the family “to mix blood.”

Kim says she doesn’t feel remorse about her decision to move in with her boyfriend before the wedding - an action still considered taboo in this society, where marriage is the only legitimate grounds for a man and a woman to live together.

“I had almost 200 blind dates with Korean men that were arranged by my parents. Most of them were elites - such as doctors, prosecutors, lawyers - from rich and distinguished families,” said Kim, who spent a year at a university in the United States to polish her English through a study abroad program when she was in college in Seoul. “But I was never willing to have second dates because the prospect of marrying them suffocated me.”

She cited the strict in-law system that is unique to Korea. Although Korean society has undergone drastic social and economic changes in tandem with modernization, the marriage system has changed the least, she claims.

“My married female friends are struggling under the immense burden of juggling work and household affairs,” she said. “Although husbands nowadays try to help, the duties of child care and making food for routine ancestral rites and family gatherings still belong to the ‘daughters-in-law.’ I don’t want to push myself into that trouble.”

Instead of rebelling against the prevailing traditional family system in Korea like many eligible bachelorettes do today, Kim turned her attention to foreign men, trying to give herself as many chances as possible to meet them. She attended various social gatherings and registered herself with a flurry of dating and social-networking Web sites a few years ago. She met her fiance through one of them last year.

Intercultural marriage is no longer considered foreign to Koreans, as an explosive number of Korean men have found spouses who are from other Asian countries over the past decade. The social phenomenon occurred amidst a rising reluctance among Korean women to marry into rural, lower-income families, regardless of their own social status.

Korea has long taken pride in being a “homogeneous” nation. In the post-war period between the 1950s and 1970s, Korean women who married the U.S. soldiers dispatched here were held in contempt. But the country now seems to be embracing the rapidly rising number of immigrant wives, becoming radically generous about men choosing foreign wives.

The number of Korean women wedding foreigners has also surged in the same nine-year period. The number of marriages between Korean women and foreign men doubled to 8,158. China and Japan accounted for the biggest proportion of men married to Korean women, at 2,617 and 2,422, respectively. Next came the United States at 1,312, Canada at 332, Britain at 166, New Zealand at 159 and Germany at 110. Four of those are countries in which English is the primary language.

James Lee, founder and CEO of Sunoo, one Korea’s largest matchmaking services, said that the increase in the number of Korean women marrying foreign men is largely due to globalization and increased access to education for women.

“First, [Korean women] have gained a larger number of chances to make contact with foreigners,” he said. “Second, professional women with a higher education have acquired greater autonomy in choosing their marriage partner.”

These trends are more apparent with women characterized as “Gold Misses” due to the shrinking number of eligible bachelors available to them, he added.

A “Gold Miss” is defined in Korea as a single woman in her 30s who is well-educated, has a high income and a good job.

In Korea, the traditional rule that husbands are supposed to be older than their wives is more strictly abided by than in other countries.

Han also belongs to the new tribe of women. The 32-year-old, who works at a domestic PR firm, met her German boyfriend, who is six years her junior, in New York last year and the two have maintained a long-distance relationship. He is a student at a business school in New York.

“I never dated a foreign guy before him,” Han said. “But I was surprised to find that the things my previous boyfriends considered as shortcomings - my strong opinions about social issues and level of exposure to the arts, such as the opera and visual arts - are highly appreciated by my new boyfriend.”

Regarding the age gap, neither she nor her boyfriend care, she added.

Chung, a 34-year-old who is a candidate for a Ph.D. in economics at a university in Washington, D.C., admits that her opportunities to meet eligible Korean bachelors have visibly diminished as she has gotten older.

“Korean men in my age group here prefer dating and marrying women in their mid to late 20s. Besides, a lot of the men I’ve met here seem to have fears about dating women who are as smart as or smarter than they are,” said Chung, who grew up in both Indonesia and Korea and has spent the past decade studying in the U.S. capital. “Until recently, I preferred Koreans as candidates for marriage, but I have come to think that foreigners are less biased against a woman’s age and education level. Why not date them if we can love and understand each other better?” she said.

Last year, she started dating a longtime friend, a Dutch man who is also a Ph.D. student. Although the couple has yet to discuss marriage, her parents are open to the possibility of her daughter marrying a foreigner, Chung said.

But the culture gap is an issue that is hard for some couples to ignore.

Park, who also requested not to be named for this piece, married a Korean man she had met while finishing her Ph.D. in North Carolina last year. Having spent her childhood in various countries, the 34-year-old, who once worked at the United Nations, speaks Korean, English and French fluently. But despite her language proficiency, she did not consider an international marriage an option.

“Having lived abroad for a sizable portion of my life, I realized cultural and language barriers are harder to overcome. Uneasy relationships with in-laws and patriarchal husbands are universal, I think, albeit with varying degrees,” she said. “I’m comfortable with my Korean husband.”

Chung would agree. The things about her intercultural relationship that make her uncomfortable include not being able to share her favorite foods - she is worried about how her boyfriend will react to the unfamiliar smell of doenjang jjigae (traditional Korean soybean paste soup) - and seeing both her boyfriend and her Korean friends have difficulty communicating.

But she is realistic about her relationship with her European boyfriend.

“It won’t be easy to live with a person from a different culture. There will be a good deal of room for compromise for both of us - from where to live to which culture our children will follow,” she said. “As a person with a foreign boyfriend, I wouldn’t say intercultural marriage is necessarily a better option, because it entails as much of a headache as a marriage with a Korean man would. But I believe the demands of marriage go beyond culture.”