Shin expected to rise to No. 1 as Ochoa leaves LPGA

Shin expected to rise to No. 1 as Ochoa leaves LPGA 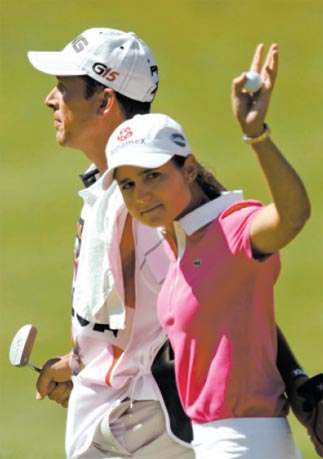 MORELIA, Mexico - Lorena Ochoa bid an emotional farewell to the LPGA tour Sunday, with tournament winner Ai Miyazato breaking down in tears as she paid tribute to the departing world No. 1.

Japan’s Miyazato carded a six-under 67 on Sunday to win the Tres Marias Championship, but her third title of the season was overshadowed by Ochoa’s last appearance as a full-time LPGA player before she heads into retirement.

During the trophy presentation on the 18th green, Miyazato cried as she thanked Ochoa, who chose the rising Japanese star to play with her in the first two rounds here.

A few feet away, Ochoa wiped tears from her eyes as well.

“I want to say thanks to Lorena,” said Miyazato, whose 19-under total of 273 was one shot better than American Stacy Lewis (66). “I really appreciate what she did for the LPGA and what she did for her country here in Mexico.

“She is one of my best friends,” Miyazato said, beginning to cry. “I’m going to miss her.”

Miyazato, who won titles earlier this year in Thailand and Singapore, shared the spotlight all week with Ochoa, who surprised the tour by announcing she would retire to focus on family and her charitable work.

Ochoa, who had won this tournament three of the past four years, carded a 71 to finish sixth on 280. American Michelle Wie was third after a 68 for 275.

Ochoa has held the world No. 1 ranking since April 2007, but she was projected to lose it when the new rankings were released yesterday. Korea’s Shin Ji-Yai was expected to move up from second place.

Shin, last year’s LPGA rookie of the year and the first Korean to finish atop the LPGA money list, won a tournament in Japan on Sunday.

Michelle Ellis, president of the LPGA players’ association, was one of several people who paid tribute to Ochoa on the 18th green.

“She is going to be dearly missed by the players and all members of the LPGA family,” Ellis said. “I think her heart and her spirit outdoes her golf game by 1,000 yards.”

Ochoa’s day was packed with goodbyes.

Walking down the first fairway, she paused to give each of the two youngsters carrying the scoreboard a kiss on the cheek.

The gallery was packed with Ochoa supporters, and “Go Lore!” chants rang out all day. Near the ninth tee, hundreds of fans held up red, yellow, blue and pink cards spelling out “Lorena.”

As Ochoa walked up the 18th fairway, thousands began waving white handkerchiefs - a tradition at bullfights to salute the matador - chanting “Lo-Re-Na!”

“This is pretty special,” Ellis said.

Ochoa won 27 tournaments, including two majors, and was the LPGA player of the year for four straight years.

“For the last eight years all of you have been there,” Ochoa said, weeping as she addressed her fellow players.

“First when I got here everybody was friendly and welcoming. So thanks for being friends, for the inspiration. It is hard to put into words, but this has been eight years of a lot of fun and I made friends I will never forget in my life.”