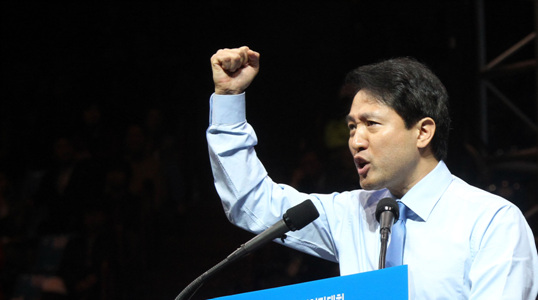 Oh won by a landslide in the primary held at the Jamsil Gymnasium in southern Seoul, beating lawmaker Na Kyung-won, who had sought to become Seoul's first female mayor, and lawmaker Kim Choong-hwan, who has served three terms as the head of Gangdong district office in Seoul.

The candidate was elected by a mixture of on-the-scene voting by individuals (weighted for 80 percent of the result) and the results of preliminary polls (20 percent) by three different research institute surveys, which surveyed 2,000 citizens each.

Voters included the party's Seoul representatives (20 percent), common party members (30 percent) and general citizens (30 percent).
Political observers say Oh won the primary by a large margin because voters consider him a strong candidate to beat Han Myeong-sook, former prime minister under the late President Roh Moo-hyun's administration, who may be the candidate of the opposition Democratic Party. That party's mayoral primary will be held Thursday, and Han is competing against Lee Kye-ahn, former lawmaker of the Uri Party, a predecessor of the Democratic Party.