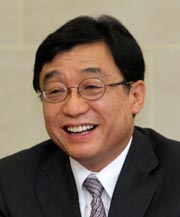 President Lee Myung-bak will choose between two candidates for the new head of Seoul National University, including public administration professor Oh Yeon-cheon, who received the most votes in the university election, SNU officials said yesterday.

While the final decision is up to Lee, normally the person who receives the most votes from the university is named its president.

“SNU has gone through an era of pursuing quality growth, and it’s entered an era of maturity now,” Oh said at a press conference after the election result was announced. “I will work hard to turn the university into a foundation for creating academic values which will be loved by all.”

A total of 2,514 professors and university workers took part in the election, and Oh received 52.3 percent of the votes. Physics professor Oh Se-jung came in second with 37.6 percent, and law professor Sung Nak-in ranked third, with 9.8 percent.

Oh Yeon-cheon obtained his bachelor’s degree in politics at SNU in 1974 and earned his master’s and doctorate degrees in public administration at New York University. He passed the civil service exam in 1975 and has taught at SNU since 1983.