Overseas know-how will pay off at Cup: Cha

Overseas know-how will pay off at Cup: Cha 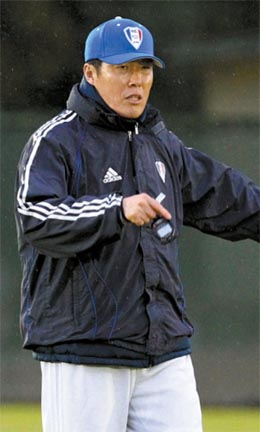 Korea has yet to survive the group phase and advance to the knockout rounds of the World Cup on foreign soil. The only time Korea made it as far as the semifinals was at the 2002 Korea-Japan World Cup, where it had the strong support of the home crowd.

Having scored 98 goals for Eintracht Frankfurt and Bayer 04 Leverkusen from 1979 to 1989, Cha is a pioneer who made a name for himself in the powerful German Bundesliga. And from his own experience playing at the pinnacle of European competition, Cha thinks the knowledge key national team players have gained playing in some of the biggest European leagues will help Korea in a big way.

According to Cha, the March 3 friendly match against Ivory Coast at Loftus Road stadium in Shepherds Bush, London, was a good indication. Korea defeated the African powerhouse 2-0.

“We were always in a situation that felt as if we were being chased,” explained Cha. “Our players showed fear, tension and nervousness in big matches. It was because we lacked experience.

“But just look at the Ivory Coast match. With experienced players who play in Europe, Korea was able to play the game with ease. Playing without pressure, our athletes were able to play their game which led to goals and a win.”

Prior to the 2002 World Cup, Korea had a tendency to cave under pressure in big matches. Admittedly, the overall skill level of the Korean teams paled in comparison to their World Cup opponents, but the losses were largely due to fear and shot nerves. It wasn’t easy for the players to overcome that obstacle.

In order to beat the best from Europe, the players had to get accustomed to the level of play in European professional leagues, and that was no simple task. At the 1998 France World Cup, Noh Jung-yoon, who played for NAC Breda of the Dutch Eredivisie league, was the only overseas-based player on the Korean squad. The 2002 squad did not fare much better, as Ahn Jung-hwan of AC Perugia in Italian Serie A and Seol Ki-hyeon of R.S.C. Anderlecht in the Belgian First League were the only Europe-based players.

The 2010 squad stands in stark contrast. Six overseas-based players - Park Ji-sung of Manchester United, Park Chu-young of AS Monaco, Lee Chung-yong of Bolton, Ki Sung-yeung of Celtic, Kim Nam-il of Tom Tomsk and Cha Du-ri of SC Freiburg - make up the core of the team.

In addition, Lee Young-pyo of Saudi Arabia’s Al Hilal, Lee Dong-gook of Jeonbuk, Ahn Jung-hwan of China’s Dalian Shide, Kim Dong-jin and Oh Beom-seok of Ulsan all have played in Europe in the past.

“I think Korea now has the players and experience necessary to reach the next level. If the key players produce at the World Cup, reaching the round of 16 is not such a difficult task,” said Cha.