Dive into the disturbing world of Damien Hirst

Dive into the disturbing world of Damien Hirst 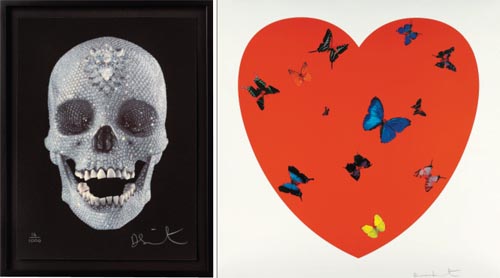 The pieces “For the Love of God, Believe” (Lithograph, Edition of 1000), left, and “All You Need is Love, Love, Love, Diamond Dust, 2009” (Silk screen print with diamond dust, Edition of 50) are among more than 30 works by Damien Hirst featured in an exhibit of his work in Seoul. Provided by Opera Gallery


One piece shows a big diamond shining in the middle of a skull, which itself is made up of a myriad of small diamonds. The bizarre combination of a skull and diamonds is eerie, disturbing, and yet intriguing.

Welcome to the artistic world of Damien Hirst, one of the most controversial artists in the contemporary art scene today. The Seoul branch of the Opera Gallery is hosting an exhibition featuring the artist, who is considered to be the leading member of the “Young British Artists,” a group of conceptual artists based in the United Kingdom who came to prominence in the 1990s for their use of shock tactics and unconventional materials in their artwork.

“What you see now is a silk screen print with diamond dust, but the original is made with an actual skull, which presumably belonged to a European male in his mid-30s. After Hirst made it, he photographed it, printed it on a silk screen and finished it with diamond dust,” Kim Young-ae, the curator of the exhibition at Opera Gallery Seoul, said about “For the Love of God,” one of Hirst’s most famous works.

What put Hirst on the map was a piece he showed at the first Young British Artists exhibition at the Saatchi Gallery in North London in 1992. The piece, “The Physical Impossibility of Death in the Mind of Someone Living,” displayed a tiger shark in a large glass case. The other work he showed at the exhibition, “A Thousand Years,” consisted of a large glass case containing maggots and flies feeding off a rotting cow’s head. Together, the two pieces caused a sensation that reverberated through the art world.

As a result, Hirst was nominated for that year’s Turner Prize, which he failed to win then but was awarded three years later. His subsequent pieces came to symbolize the spirit of the so-called YBAs.

The current exhibition in Seoul shows 35 of the artist’s works, including his well-known “spin paintings,” which were created on a spinning circular surface, and his “spot paintings,” which feature an array of randomly colored circles, the motif for which was derived from pills.

“Hirst always tackles themes of life and death in his artwork, which is well reflected in the works featuring pills and syringes,” Kim said.

Regarding his interest in laboratory equipment and medicine, mingled with themes of life and death, Hirst once said: “Art is like medicine - it can heal. Yet I’ve always been amazed at how many people believe in medicine but don’t believe in art, without questioning either.”

*The Damien Hirst exhibition runs until May 15 at Opera Gallery Seoul in Cheongdam-dong, southern Seoul. The gallery is open from 10 a.m. to 7 p.m. and admission is free. Go to Cheongdam Station, line No. 7, exit 9. For more information, contact the gallery at (02) 3446-0070 or visit www.operagallery.com.