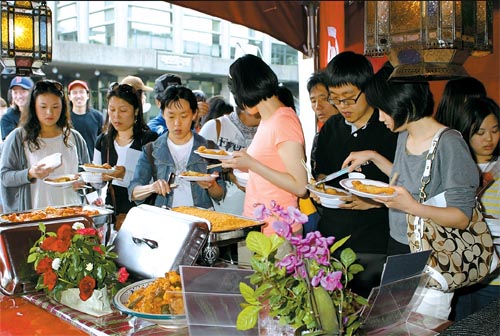 The Arab Cultural Festival, which will be held later this month in Seoul, features an Arab Food Market where visitors can sample food from 10 countries.

This month, Koreans will have an opportunity to experience Arab culture in the heart of Seoul when the third edition of the Arab Cultural Festival kicks off on May 20 at the National Theater of Korea. The festival offers people a chance to explore traditional and contemporary aspects of the culture of 14 Arab countries.

The annual event, which is hosted by the Korea-Arab Society and supported by the Ministry of Foreign Affairs and Trade, was launched three years ago to promote greater understanding of the Arab region and its culture in Korea.

The third edition of the festival offers a wide variety of performances, exhibitions and cultural activities.

“While the Arab region often conjures images of construction projects, oil and energy, it was actually the birthplace of civilization relating to Babylonia,” Choi Seung-hoh, secretary general of the Korea-Arab Society, said. “The region boasts a rich culture and heritage.”

“The Arab Cultural Festival is the biggest event featuring Arab culture in Korea. This year, six Arab countries will come into the spotlight through their traditional performances,” Kim Jae-cheon, director at the Korea-Arab Society, said. 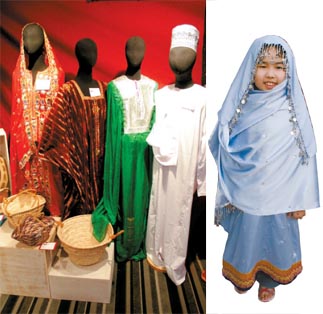 Traditional Arab handicrafts and clothing will be displayed at the National Theater of Korea’s Cultural Plaza during the same period. Provided by the organizer

National troupes from four Arab countries - Libya, Lebanon, Iraq and Kuwait - will present traditional dance and music performances each day from May 20 to 23. The Libyan National Troupe is scheduled to open the festival, in celebration of the 30th anniversary of the establishment of diplomatic relations between Korea and Libya.

To complement the festival program, there will be exhibitions and hands-on experience activities offered through the Arab Plaza, Arab Food Market and Digital Arab events.

The Arab Food Market, which was well received by festivalgoers in previous years, allows visitors to sample dishes from about 10 Arab countries.

“The embassies of Arab countries in Seoul including Sudan, Tunisia, Lebanon, Morocco and Oman will provide various dishes as they have at previous events, while the embassies of U.A.E., Kuwait, Saudi Arabia, Iraq and Algeria will also participate this year,” the event organizer said.

The Digital Arab event is new this year. Through the event, elements of Arab culture such as calligraphy, music and clothing will be displayed via cutting-edge IT devices from Korea.

Meanwhile, the special exhibition entitled “Fluid Form I - Arab Contemporary Art & Urban Design” will be held in tandem with the festival at the Korea Foundation Cultural Center from May 18 to 24. 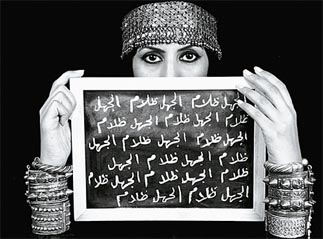 “I am an Educator,” a photograph by Saudi Arabian artist Manal Al Dowayan, will be one of the works on display in the exhibition “Fluid Form I - Arab Contemporary Art & Urban Design,” to be held alongside the Arab Cultural Festival.

The exhibition will display photographs, video installations, text and films that show images of architecture and urban design in Arab countries. Several artists, including Tarek Atoui (Lebanon), Ammar Al-Beik (Syria) and Mohammed Kazem (U.A.E.), are also expected to be in town during the exhibition.

“The images of contemporary architecture, urban design and the urban life of residents in the Arab region are apparent in this contemporary art exhibition,” Kim Yu-yeon, artistic director of the exhibition, said.

One part of the exhibit shows Saadiyat Island, a part of the U.A.E.’s capital city of Abu Dhabi. The area is a cultural district where renowned architects combine Eastern and Western influences in their buildings to create a new urban environment, which has helped Abu Dhabi emerge as an architectural hub in the Arab region, Kim explained.

In advance of the official opening of the festival, there will be special performances at 2 p.m. today at Selmundae Women’s Center on Jeju Island. The event features a traditional music and dance group from the United Arab Emirates and the Fingers of Peace Folk Band from Algeria.

*The Arab Cultural Festival will be held from May 20 to 23 at two venues at the National Theater of Korea: the KB Haneul Youth Theater for performances and Cultural Plaza for outdoor events such as the Arab Food Market, Arab Plaza and Digital Arab. All events are free. For more information and reservations, call (02) 3216-1185 or visit www.arabfest.org.