The Figures of Eros section of the “Rodin: Retrospective” at the Seoul Museum of Art in central Seoul.[YONHAP]

Many people will be familiar with the image of the dark bronze “The Thinker” by French sculptor Auguste Rodin (1840-1917). But not many can claim to have seen the original plaster sculpture from which the bronze statues were made. The light-colored sculpture shows more vividly the sinews of The Thinker and the marks made by Rodin, who disdained the highly-finished surfaces of the conventional sculptures of his time.

Visitors to the Seoul Museum of Art in central Seoul can now see the sculpture and other pieces by the man who is considered “the father of modern sculpture” at a Rodin retrospective that continues at the museum through Aug. 22. This is the first time since 1985 that a large-scale exhibition of Rodin’s work has been held in Korea.

“Rodin’s originality comes from his efforts to express the inner side of the model through the sculpture,” said Seo Soun-jou, director of the exhibition. He pointed out that the exhibits highlight Rodin’s efforts to that end.

The show displays 113 sculptures in bronze, marble and plaster, 42 drawings and 25 photographs on loan from the Paris-based Musee Rodin. 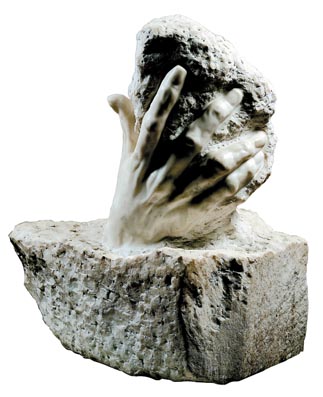 “Hand of God” by Auguste Rodin. Provided by Musee Rodin

This is the first time some of the exhibits, including the original plaster sculpture of The Thinker, have left France, according to the Seoul Museum of Art.

The marble sculpture “Hand of God” is another piece being shown outside of France for the first time. It welcomes visitors at the entrance of the exhibition hall on the museum’s second floor.

The sculpture, which depicts a gigantic hand holding a stone from which a small human figure is emerging, demonstrates Rodin’s pride as a creator. It also shows the artist’s defiance of the conventional idea that a sculpture is finished only when its surface is smooth.

As the Austrian-born art historian Ernst Gombrich said in his book, “The Story of Art,” Rodin would leave a portion of the stone unworked in order to leave the “impression that his figure was just emerging and taking shape.”

But Rodin did not completely ignore the sculptural tradition. His piece, “The Age of Bronze,” which is displayed in the first section of the exhibition, is an example of this.

The bronze, which Rodin made after his trip to Italy in 1875, shows the influence of Italian Renaissance master Michelangelo.

At the same time, the sculpture has modernist elements. Due to its realistic depiction of a man, rather than an idealized one, Rodin was accused of casting the piece directly from a live model, rather than sculpting it himself. But the controversy the sculpture generated enhanced Rodin’s reputation.

The exhibition is divided into nine sections: The Age of Bronze; The Gates of Hell; The Burghers of Calais; The Figures of Eros; Rodin in His Studio; The Dance - Body in Movement; Camille Claudel; Rodin in 1900, Pavillion d’Alma; and Monuments: Balzac and Victor Hugo.

The Gates of Hell section shows sculptures that are part of the sculptural group by the same title. The Gate is based on “Inferno” from Italian poet Dante’s “Divine Comedy.” The sculptures on display include The Thinker, “Adam,” “Eve” and “Despair.”

The Figures of Eros section is filled with works that show Rodin’s fascination with the female body. Works such as “The Kiss” and “Eternal Idol” also depict the fatalistic tensions between men and women.

Many of these works were inspired by the female sculptor Camille Claudel, who was Rodin’s student, lover and muse, according to Seo.