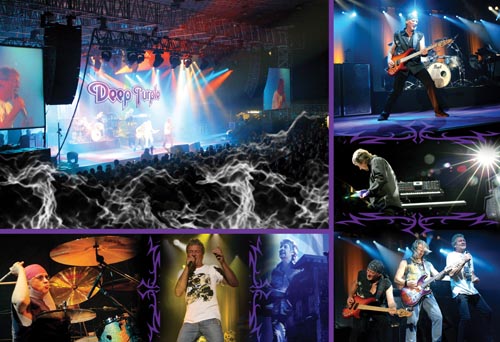 British rock band Deep Purple will hold a concert at Olympic Park on May 18 and 8 p.m. They are considered pioneers of heavy metal and modern hard rock. See MUSIC, below. Provided by Stage Factory

Saturday: Art-pop band Xiu Xiu will wrap up their Korea tour this weekend in Hongdae. The band’s lush hooks and experimental structures have made them a must-see for fans of experimental rock.

May 16: Violinist Kim Chee-yun will join the BBC Symphony Orchestra, the studio orchestra of the British broadcaster, on stage for this special performance sponsored by Hyundai Capital.

The BBC Symphony Orchestra was founded by the well-known British conductor Adrian Bolt in 1930, and has served as the main orchestra for The BBC Proms classical music festival.

May 18:Heavy metal pioneers Deep Purple are stopping by Seoul as part of their 2010 world tour.

Formed in 1968, the band has sold over 100 million albums worldwide. They’ve had several hits over the years including “Black Night” and “Fireball.” In keeping with their hard rock persona, the band was once listed as the world’s loudest band in the Guinness Book of World records.

Ongoing: Canadian Fan Yang, who has been called the world’s greatest bubble artist, and his brother Jano Yang are presenting an inventive bubble show for the whole family to enjoy.

The show is a feast for the eyes, as the stage is filled with a myriad of marvelous bubble creations crafted by hand or using simple tools. Cascades of bubbles, creative lighting, a laser show and special effects lead the audience into a world of dreams and fantasy. Aside from being a display of artistic talent, the show is filled with plenty of opportunities for audience members to take in the scientific wonder and beauty of the bubbles.

To May 15: The popular Russian ice ballet troupe presents a dramatic interpretation of the opera Carmen.

To June 13: “Monte Cristo” is a musical retelling of Alexandre Dumas’s 1844 novel “The Count of Monte Cristo.” The musical follows Edmond Dantes, an honest sailor who is wrongfully arrested during his engagement party for being a traitor to his country. To carry out his plan for revenge, Dantes transforms himself into the mysterious and wealthy Count of Monte Cristo.

The musical starts at 8 p.m. on weekdays and at 3 and 7 p.m. on weekends and public holidays. There are no performances on Mondays.

To June 20: Selected as the No. 1 musical in Korea by the Chosun Ilbo following its debut in 2008, “Hey, Bro!” is a refreshing breakthrough in the world of musical theater.

The musical starts at 8 p.m. on weekdays, at 3 and 7 p.m. on Saturdays and at 2 and 6 p.m. on Sundays. There are no performances on Mondays.

KISS AND MAKE UP

To June 30: The musical “Kiss and Make Up” is set on the battlefield of love. It tells the tale of one married couple who is looking for love, and another couple that fakes a divorce for money.

In this day and age, where one out of every two couples is divorced, the musical is a timely look at the challenges of marriage and love.

The musical starts at 8 p.m. on weekdays, at 3 and 7 p.m. on Saturdays and at 4 p.m. on Sundays. There are no performances on Mondays.

Friday to May 29: Based on a Japanese novel of the same name, “The Midnight Sun” is a musical focused on the pangs of a difficult romance. Kaoru suffers from a skin disease that restricts her from going outside during the day. She falls in love with a surfer who spends all of his time under the sun.

The musical starts at 8 p.m. on weekdays, at 3 and 7 p.m. on Saturdays and at 4 p.m. on Sundays. There are no performances on Mondays.

To Sunday: This lively and accessible performance is designed to help children take an interest in traditional Korean music. With the movements of the actor robots Ever and Seropi and a special space travel scene, there is plenty to stimulate the imagination of a young audience. The social issue of bullying is also addressed through traditional Korean singing.

The performance starts at 11 a.m. on weekdays and at 2 and 5 p.m. on weekends and public holidays. There are no performances on Mondays.

To May 23: As part of the “Palace Musical” project of the Seoul Foundation for Arts and Culture, “Dae Jang Geum” was produced specifically to be performed in Gyeonghui Palace.

A musical that portrays Korea’s palace life and history, it has become popular with international audiences. It was a recipient of the awards for Best Musical and Best Directing at the 2009 Korean Musical Awards and won the Musical of the Year award at the Korean National Awards.

The musical starts at 8 p.m.

To July 4: “Taekwon Monkey” aims to introduce taekwondo, the Korean martial art, to audiences in an entertaining way. Taekwondo is the world’s most popular martial art in terms of the number of practitioners.

The story is about a monkey who longs to become human. The dance-like movements of the taekwondo practitioners on stage engage the audience’s imagination as the monkey tries to become a human.

The performance starts at 8 p.m. on weekdays, at 3 and 6 p.m. on Saturdays and at 2 and 5 p.m. on Sundays and public holidays. There are no performances on Mondays.

The performances include the Jin-do Ssitgimgut (a shamanist ritual for cleansing a dead person’s soul), Ganggangsullae (a Korean circle dance), and Dasiraegi (a funeral play performed to comfort mourners and pray for the soul of the deceased), which are three of the country’s important intangible cultural properties.

The performances begin at 2 p.m. every Saturday.

To May 16: Icheon has 1,000 years of history in ceramic arts and its ceramics festival is one of the most famous in Korea. Here visitors can see a variety of Korea’s finest ceramics such as cheongja (celadon porcelain), baekja (white porcelain) and buncheongsagi (grayish-blue powdered celadon).

Popular festival events include the ceramics excavation program and a workshop in which visitors can draw their own artwork on slightly heated pottery. Visitors in need of some relaxation can visit the highly regarded hot springs located nearby, which used to be visited by the kings of the Joseon Dynasty (1392-1910).

From Dong Seoul Terminal, take a direct bus to Icheon Terminal. Then take a taxi from the terminal to the festival.

May 14 to 16: To celebrate the Buddha’s Birthday, which falls on May 21, lanterns will light up downtown Seoul.

The lantern festival keeps alive the tradition of the Yeon Deung Hoe (Lotus Lantern Festival) of the Goryeo Dynasty (918?1392) and the Gwandeung Nori (a lighting festival) of the Joseon Dynasty. The original ceremony was seen as nurturing a society filled with wisdom and mercy and fulfilling individuals’ wishes by lighting up the darkness in people’s hearts.

Festivalgoers will see the streets transformed by around 100,000 beautifully embroidered and lovingly made lanterns in all kinds of shapes, such as elephants, dragons and tigers.

May 18 to June 19: The Gangneung Dano Festival is a long-running traditional festival that celebrates Dano (the fifth day of the fifth month according to the lunar calendar). This day, together with Lunar New Year and Chuseok, is one of the three major holidays in Korea.

The festival offers a combination of various shamanist and memorial rituals along with some traditional games. Opening events include the brewing of a sacred liquor that is offered to the mountain deity and the rituals held in Daegwallyeong. During the festival, visitors can try out a traditional Korean swing or make a traditional Korean mask that drives away evil spirits and summons a healthy year. Other attractions include exorcisms, mask dances and pungmul (traditional Korean folk music and dance).

From the Dong Seoul Bus Terminal, take a bus headed for Gangneung. Get off at Gangneung Intercity Bus Terminal and take a taxi to the Dano Cultural Center.