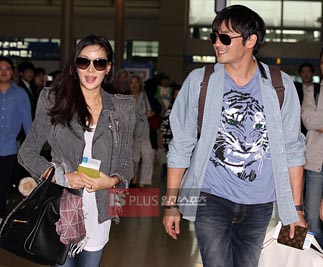 The frenzy surrounding thespian celebrity couple Jang Dong-gun and Ko So-young's wedding didn't end when all their guests went home: eager fans are following the couple to their honeymoon to Bali, Indonesia.

But as Ko is four months pregnant, the couple is hoping for some peace and quiet for few months to focus on prenatal health.

Jang was planning to shoot a new movie, "My Way," starting in June, but as the filming has been pushed back to October, he now has five months of time on his hands. So the actor wants to spend that time with his new wife and unborn child.

One of Jang's close associates said that Jang has had a lot on his plate lately, particularly with preparation for the wedding. Now he can pause for a little break. "Jang won't have any other schedule for now, which will allow him to take a good rest at the honeymoon," Jang's associate said.

Still, it appears that the worries associated with fatherhood are already setting in. Jang chose Bali as their honeymoon destination, considering the fact that his wife is four months pregnant and long flights would particularly strenuous. He is also taking two of his managers just to make sure nothing goes wrong.

Another one of his associates said that Jang has packed foot-massage oil and some CDs on prenatal education. And apparently, the couple has already decorated a baby room at their new house for the child who will definitely cause a frenzy of his or her own in November.