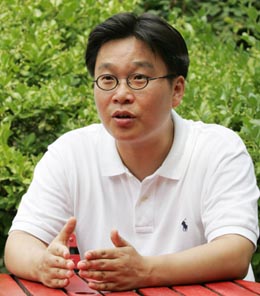 The front page of the Wall Street Journal’s European edition of April 28 may have caught the attention of readers as it had a right-hand corner advertisement that said “Annyeonghaseyo,” Korean for “hello.”

The advertisement was inserted by Seo Kyoung-duk, a professor of communications at Sungshin Women’s University, to promote the Korean language in Europe.

Earlier this year, Seo also launched a video advertisement promoting Korea’s sovereignty over the Dokdo islets in the form of a crossword puzzle that received a massive response home and abroad. Seo has gained fame for his efforts in this regard since he has been promoting various advertisements on Dokdo and Korea, starting at The New York Times in 2005 and later The Washington Post and The Wall Street Journal.

He also helped start a Korean language service at major museums in the U.S., including the Metropolitan Museum of Art and the Museum of Modern Art in New York and the Smithsonian in Washington. Seo discussed his promotion efforts with the JoongAng Daily.

Q. Why did you choose Times Square?

A. Times Square is one of the most visible spots in the world and huge numbers of people, including tourists, pass through there each day.

A year ago while I was walking through the area, I thought it was the perfect place to effectively promote Korea. At each end of the street, you also have The New York Times and The Wall Street Journal.

The biggest obstacle in achieving the plan was getting the financing. Although many Korean companies have helped us promote Korea, they were more cautious when it came to Dokdo because of the sensitive nature of the issue. Fortunately, Kim Jang-hoon [a Korean pop singer], whom I’ve known for a long time, financed our advertisement. 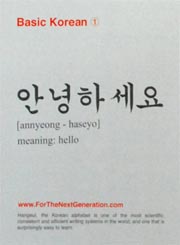 Instead of stressing the conflict we have with Japan, we tried to grab the viewer’s attention by introducing Dokdo as a tourist attraction for Korea similar to other popular islands like Hawaii, Sicily and Bali. The advertisements were produced by volunteers, including the chief executives of advertising companies.

How did you become a promoter of Korea?

I never thought that promoting Korea would be a career when I was young. Fifteen years ago, I was a college student who traveled to Europe to see the world with only a backpack. I wanted to see the world since high school when globalization was a big subject in Korea.

But when I arrived in Europe I was shocked. In high school, I had learned that Korea was the 11th largest economy in the world and a country that had successfully hosted the 1988 Olympics and the 1986 Asian Olympics.

I thought people around the world would by then have recognized Korea. But Europeans asked me if I was Chinese or Japanese and never even asked if I was Korean. I felt embarrassed. Since then I added a trunk when traveling abroad filled with Korean items and booklets promoting Korea.

Because I was a student I also visited various universities and in their libraries I was also shocked to see very few books about Korea when there was a ton of information on China and Japan. Even if they had a book, it was a 1979 published edition depicting Korea as an agriculture-based industry. Working on the farm was the image that students in other countries would have of Korea, which was far from the truth. I started to donate updated publications on Korea translated into English.

The next thing I knew, promoting Korea became a job. People started to recognize me as a young promoter, an evangelical and expert on advertising Korea. Especially foreigners found it interesting that a person who is not attached to the government was going around promoting the country.

It wasn’t easy at first. The directors and top officials at museums wouldn’t see me, but I was persistent and sent e-mails explaining what I was trying to achieve. They noticed and listened to me especially since I was not an official promoter.

Today I get a lot of help from the Korean government as well as Korean companies. The attitude of Korean companies has changed a lot since the [Korea-Japan] World Cup in 2002. They’ve become more active in social contributions, which includes promoting Korea as a global brand.

So why did you start inserting advertisements in major international publications?

It was in February 2005 when I was in New York to help establish Korean language services at museums.

I was watching CNN where Japan was claiming Dokdo as its own.

I thought I had to set the record straight and promote Korea’s sovereignty over the islets. It was clear when riding on the subways that New Yorkers were reading either The New York Times or The Wall Street Journal and I thought it would have a major impact if I put an advertisement in such publications.

After the advertisement appeared in The New York Times, it was reported by the BBC. I became confident in the effects of the promotion. Three months later, I put another advertisement in The Wall Street Journal.

I paid for the New York Times advertisement, but my family helped with the The Wall Street Journal. Today I get funding from a lot of people, including from the Korean public.

I know that the Dokdo issue will not be resolved in just one or two years. It is an issue that needs to be worked on for a long time until the world acknowledges Korea’s sovereignty over the islets.

Of course putting up such advertisements has its consequences. I have received death threats from Japanese conservative organizations. Alarmingly, there are also Koreans that chastise me for stirring up the relationship with Japan.

I have no political agenda but I hope that this would correct the distorted history between the two countries. Then the young people of Korea and Japan will have a healthier relationship. In fact there was a Japanese professor at the University of Tokyo who thanked me in an e-mail for telling the truth about the distorted modern history to Japanese students.

What is the biggest problem that Koreans need to change?

What we need to do first is to change our etiquette. Fixing our etiquette when traveling abroad would leave a better impression of Koreans.

There was this youth hotel in Europe where I saw a small sign on the wall written in Korean that said “do not pack away food.”

Koreans like to pack food from even the smallest buffet. This is because of the cultural difference where Koreans hate to leave food lying around. However, when going abroad Koreans should refrain from packing away foods.

There was also a time when I was visiting a small museum in England. There was an Asian section that had a map of Korea, China and Japan.

But there were knife cuts obliterating the “Sea of Japan” and “East Sea” was written with a magic marker next to it. This is not patriotism and can be defined only as vandalism. A person who truly feels patriotic should request a meeting with the museum officials and make an official complaint to change the designation to “East Sea.”

We need to be educated about this at a very early age since manners can not be changed overnight. Anyone can be a promoter of Korea if they follow global etiquette. Becoming a private promoter doesn’t have to start by putting ads in The New York Times but rather from the smallest actions.