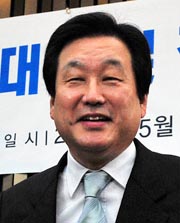 Representative Kim Moo-sung was named the new floor leader of the Grand National Party yesterday, and said he will aim to create harmony between the ruling party’s opposing factions.

Without a vote, the Grand Nationals selected Kim and Ko to one-year terms in their new leadership posts.

“As the floor leader, one of the most important tasks is bringing about harmony inside the party,” Kim said after his selection yesterday. “I will create an atmosphere of smooth communication among lawmakers.

“GNP former chairwoman Park Geun-hye is a leader of the ruling party, and I will report to her and consult with her when necessary,” he added.

The Grand National Party has been plagued by power struggles between the Lee and Park factions. Kim, a four-term lawmaker representing Busan’s Nam District, was once called the most prominent member of the pro-Park faction, but he and Park became estranged earlier this year when he challenged the former chairwoman’s view on Sejong City.

In February, Kim appealed to Park to reconsider her opposition to the government’s attempt to rewrite the Sejong City development plan. Kim, who had closely assisted Park for the previous six years, asked her to accept a compromise proposal, infuriating her.

Although Kim’s political split with the former chairwoman came this year, the first signs of his estrangement from the Park faction were seen a year ago. At the time, pro-Lee lawmakers proposed to make Kim a floor leader as a peace offering to the Park faction, but the appointment was never made because Park rejected the plan.

When Kim made his bid this year, Park made no public opposition, perhaps an indication that the two factions are mending fences. It remains to be seen, however, how Kim will handle sensitive issues, including the Sejong City revision plan.

“We will have more discussions internally,” Kim said. “The government has already submitted the revision bill to the National Assembly, so we must review and vote on the issue. The opinions are split inside the party and the issue is how to coordinate them. I will do my best to bring about a compromise.”