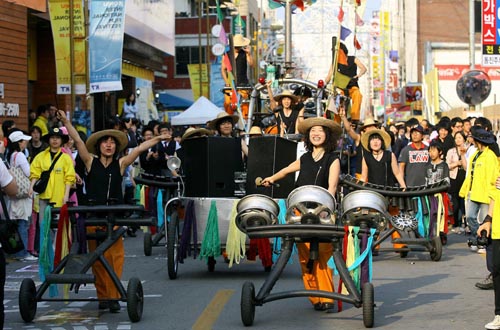 A musical parade pushes past the festival’s main venues on Cinema Street. Provided by JIFF/[YONHAP]

Amid the fresh green of a long-awaited spring in the small city of Jeonju, North Jeolla, moviegoers old but mostly young were standing in line Sunday as early as 8:30 a.m., waiting for ticketing to begin for the fourth day of the 11th Jeonju International Film Festival.

Most of the advance tickets to the event’s screenings of 209 features and short films had sold out, and these cinephiles, poring over schedules and taking photos, were here to ensure a chance at the 15 percent of tickets reserved for day-of customers.

They were here not to see a new blockbuster or even the sort of big-name films that headline Korea’s top film fest in Busan. Most of Jeonju’s world premieres aren’t glamorous prestige projects. They’re small, low-budget but vibrant affairs like So Joon-moon’s “REC,” about a gay couple in Seoul celebrating their fifth anniversary.

These people were in line for a retrospective of indie documentarian Kim Dong-won, to introduce themselves to South American film, to experience the Korea Film Archive’s latest discoveries from the 1920s and ’30s, or to learn about the filmmaking process one-on-one in seminars and master classes.

The two masters in the spotlight this year were Korea’s Bong Joon-ho of “The Host” and Portugal’s Pedro Costa, who gave the organizers unused clips from his genre-busting fictional documentary “In Vanda’s Room” for use in an art installation on the festival grounds. 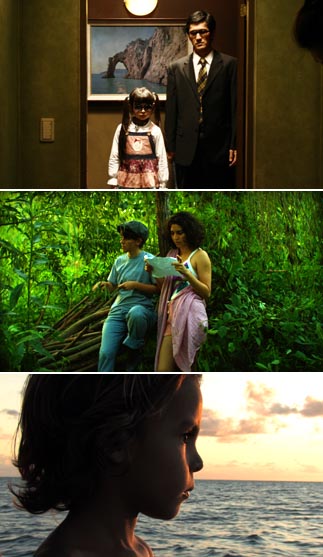 On his second visit to JIFF and his fourth trip to Korea, Costa was heartened by the crowds.

“Jeonju is a very, very special festival,” he said at a press conference Sunday morning. “I had the same impression three years ago, and now it’s even stronger. It’s amazing how many people go and see very different and difficult films. Sometimes I see very strange, experimental stuff sold out.”

As a prelude to his lecture Saturday evening, Bong offered a very unusual screening - the first and last reels of each of his four feature films: “Barking Dogs Never Bite,” “Memories of Murder,” “The Host” and last year’s “Mother.”

It was Bong’s jumping-off point for a discussion of beginnings and endings. Inspiring the theme was a question he’d been asked “hundreds of times” about his most recent film, which begins with the title character, played by Kim Hye-ja, dancing in a field and ends with her dancing on a tour bus with other aging ladies. That question: Why?

“So every time someone asked me the question, I started giving different answers,” Bong said. “And I started thinking about the openings and endings of my previous films.”

Introducing Bong’s class was Jung Soo-won. “I have been a programmer at JIFF for eight years and this is the first time I’ve seen no empty seats at a master class,” she said.

Bong may now seem unusually mainstream for JIFF - but of course, he wasn’t when his debut feature premiered there in 2000, which he remembers fondly as “the first international film festival I was invited to,” and his star was just beginning to rise when he directed “Influenza” for the Jeonju Digital Project in 2004.

That is an annual affair, through which the festival gives three internationally renowned directors 50 million won ($45,000) each to create a digital short. Costa has also participated in a previous iteration of the program.

“Short! Short! Short!” is the other major piece the festival funded - three short films by independent Korean directors. This year the lucky three were Lee Kyu-man, Kim Tae-gon and Han Ji-hye, who created films in theatrical settings centered on the theme “fantasy and fear.”

Outside on Jeonju’s “Cinema Street,” there was plenty to keep visitors busy, including performances by Clazziquai and other popular bands and family-friendly outdoor screenings in the evenings.

One of the most anticipated screenings ended up not happening: that of revered director Im Kwon-taek’s 101st film, “Dalbit Gireo Origi.” The film, known to center on the traditional Korean craft of hanji paper, will be ready by the end of the month, Im said at a party in the city on Friday.

Final statistics are not yet available (the festival closes tomorrow), but the audience response seems unassailably positive.

“It had a wonderful atmosphere, people were exceedingly friendly, they had translators at almost all the events that did a superb job,” said Jonathan Pais, an English teacher based in Busan. “I like that the focus is on independent cinema, art cinema, and I think they had a really good selection. It’s a great city. I want to go back soon.” 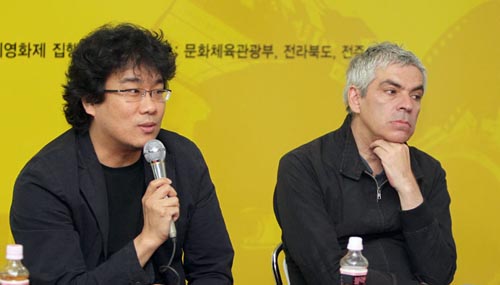 
Thinking back to his debut “Barking Dogs Never Bite,” which begins with a shot of “just leaves and a dog barking,” director Bong Joon-ho implicitly compared filmmakers to serial killers - a subject that seems to keep popping up in his work.

Watching the film again, “I was reminded of ‘Silence of the Lambs,’” Bong said.

“Where Hannibal Lecter is telling Clarice how Buffalo Bill selects his victims. He says you start by coveting what you see... The killer lives near the first victim.”

Similarly, he said, the shot out the window was one he’d wanted to capture for years, when he was stuck indoors in a city apartment during the day.