Fans of the boy band 2PM take pictures of their idols at the “Anycall Corby Family Festival” concert in Olympic Park in southeastern Seoul late last month. Some fans have turned against the band after it ejected one member, Park Jae-beom, in February, and are boycotting companies that sponsor the band. Park had to quit because he posted negative comments about Korea on the Internet. [NEWSIS]


It started out like an ordinary business day in February for Lee Sang-min and other members of the public relations team at Orion Confectionery, a local snack maker. But as soon as business hours began, the quiet was shattered by an explosion of phone calls and faxes.

Lee now remembers it as “the day it became official that Park Jae-beom was leaving.”

Park was a member of the boy band 2PM who was forced to quit the group after it was revealed he had posted negative comments about Korea on MySpace years earlier.

The calls and faxes were from Jae-beom fans, demanding Orion terminate its marketing contracts with 2PM as retaliation against the group’s management agency, JYP Entertainment.

“We ended up turning off the fax machine. Ever since then, we’ve been watching 2PM and their moves closely.” After that chaotic day, Lee said the company even received handwritten letters from fans. 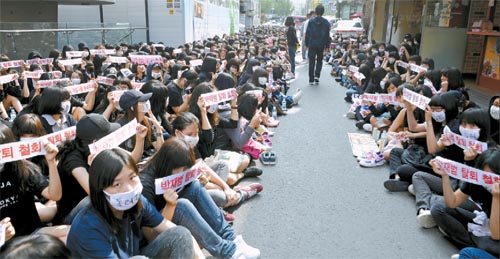 An association of nationwide fan clubs of idol group 2PM stage a demonstration to pressure JYP Entertainment to bring back Park Jae-beom, a former member, to the band. About 2,000 fans gathered in front of JYP Entertainment headquarters in Cheongdam-dong, southern Seoul, for the protest in September 2009. [JoongAng Ilbo]

When the snack manufacturer signed on with the up-and-coming idol group last year, Lee had no idea what he would be getting himself into. At first, fans would frantically upload posts about snacks endorsed by 2PM as if analyzing a new IT gadget. But after that fateful day in February, their attitude changed. Enraged with the agency’s decision, about 50 nationwide 2PM fan clubs formed an association and declared a boycott of every product endorsed by the band so as to pressure JYP Entertainment to bring Park back.

Also on 2PM fans’ boycott list: the family restaurant chain Bennigan’s, whose local operation is an affiliate of Orion Confectionery.

Far from the pliable cash machines they once were, fan clubs today can be powerful pressure groups. All three of Korea’s major show biz management agencies: SM Entertainment, YG Entertainment and JYP - have liaison divisions to work exclusively with fan clubs.

JYP Entertainment tried to calm furious fans by inviting about 90 selected club organizers to a closed meeting with 2PM members, the first time such a meeting had been arranged for anyone but reporters or industry officials.

“The relationship with the fans is pretty important. That’s why we invited them and let them ask 2PM members questions,” said Han Su-jeong, head of the fan club liaison team at JYP.

But that gesture failed to cool tempers. Fans kept up the boycott and even took to the streets to stage demonstrations against JYP. A powerful entity, JYP raked in 10.1 billion won ($9.1 million) in sales in 2009 alone. Although Lee at Orion said the boycott didn’t affect sales, a break like this one between a fan club and an entertainment agency would once have been unheard of. 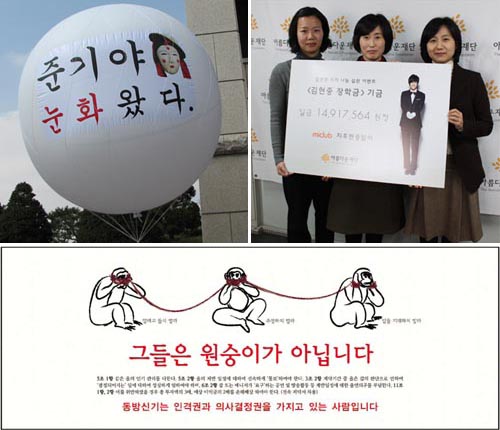 Top left: An ad balloon cheering on actor Lee Jun-ki on the day his military service began. Provided by the Lee Jun-ki Gallery
Top Right: Fan clubs of singer and actor Kim Hyung-joong established a fund for college students and the disabled in February. Provided by the Beautiful Foundation
Above: Fan clubs of the boy band TVXQ placed this front-page ad in the local daily newspaper Hankyoreh in September last year to support the band in its legal struggle against its agency SM Entertainment.

Why now? The demographics of idol fans are changing. Once, fans were mostly young students who were content to send love letters or jars of paper cranes as a token of their love for their favorite stars.

Men in their 30s and 40s devoted to teen girl groups like Girls’ Generation have come to be known as samchon (uncle) fans. The female equivalent is yimo, or aunt, fans.

“With Girls’ Generation, I guess people of all ages, even men in their late 30s and 40s, have started to join fan clubs,” said Kim Eun-ah, head of a public relations team at SM Entertainment, which was Korea’s biggest entertainment agency by revenue last year thanks to its popular idol acts including Girls’ Generation, Super Junior and TVXQ.

Kim said fans shape public opinion and move the market. “If you look at the Jae-beom case, you know how important [fan clubs] are.”

Unlike teenage fans, these economically active adults are willing to open - or close - their wallets if they think it’s in the best interest of their beloved stars.

But fans don’t just use their financial independence to protest. Most recently, fans of singer and actor Kim Hyun-joong, who starred in the hit TV drama “Boys Over Flowers” (2009), established a scholarship fund for the disabled in Kim’s name.

Kim Jin-ah at the nonprofit Beautiful Foundation, which runs the fund, said, “They are mostly women in their 20s and 30s. They said they wanted to contribute to society in the name of their favorite star.”

The Kids and Future Foundation even launched a campaign called “Love for Stars, Love for Donation” March last year to persuade fan clubs to donate. Lee Young-mi, on the foundation’s public relations team, said it had been “a great success so far.”

Left: Fans of singer Seo Tai-ji congratulate Seo on his 38th birthday with an ad on a screen in the shopping district of Shibuya in Tokyo in February. Provided by [T]amo / Right: Japanese fans of actor Bae Yong-joon pick up trash in downtown Chuncheon, where Bae’s hit TV drama “Winter Sonata” was filmed. [JoongAng Ilbo]

Fans have also adopted the practice of placing newspaper advertisements to voice their support and displeasure. Costs vary depending on the publication and size, but running an ad at the bottom of a page in a daily newspaper typically starts at 10 million won ($8,970).

Fans of the boy band TVXQ placed a front-page ad in a local daily newspaper in September 2009 to support members in the midst of a legal feud with their agency SM Entertainment. The ad accused SM of overworking the boys after three of the five members spoke out, calling their 13-year contracts unfair and unethical.

In August last year, some clubs even filed a petition with the National Human Rights Commission of Korea, accusing SM of violating TVXQ members’ human rights.

Followers of singer Seo Tai-ji have participated in public hearings on musical copyright law and have taken legal action against artists who parody Seo’s songs.

When G-Dragon, a member of the idol band Big Bang, released his first solo album in August, fans bought stacks and stacks and visited news agencies and broadcast stations to hand out copies.

Fans of M.C. Mong, singer and host of a hit variety TV program, went further. “When some songs by M.C. Mong were leaked before their official release last year, fans visited every single peer-to-peer Web site and persuaded netizens not to download them,” said Kim Min-jeong, a public relations official for IS Entertainment Group, who has been working with M.C. Mong for the past 10 years.

“We have another singer, Min Kyung-hoon. And thanks to his fans, we are gaining weight every day,” laughed Kim. “His fans even prepared 200 fancy lunches the other day for staff members working at a concert.

“Without them, you can’t even think about getting the attention of the general public. I feel like they are not fans but great supporters or partners,” Kim said.

“Without the Internet, it’s hard to imagine associating with other fans living in other parts of Korea,” said Roh Kil-sook, 41, who organized the fan club “Great Birth” for singer Cho Yong-pil, who recently celebrated his 60th birthday and is considered the first singer to bring “groupie culture” to Korea.

Roh, who lives in Yangjae, southern Seoul, has been a devoted fan of Cho for 30 years. She confesses managing a fan club with about 15,000 members is almost like having a second job.

“When I get home from work, the first thing I do is turn on the computer because I have lots of things to check and decide. For this reason, I go to bed around 1 or 2 a.m. every day,” she said.”

“For example, we have to arrange passenger buses for fans living outside Seoul when they come to Seoul to see oppa [a term of endearment used for male entertainers], and we also have to decide how to make small banners that will be handed out at concerts when cheering.”

Roh is a working mom, and she’s passed on the fangirl gene to her teenage daughter, who adores the idol group Super Junior.

“We gave rice cakes to officials at broadcasting stations and news agencies, and collected money to place a newspaper ad to congratulate oppa on his birthday. We’ve been so busy.”

The ultimate goal of Great Birth, Roh said, is simple. “Oppa can’t live forever. Our mission is to collect all the data regarding him and donate it when a museum for oppa is opened.”

“In the past, fan clubs were considered things for teenagers,” said Hwang Sang-min, a psychology professor at Yonsei University.

“For these uncle fans and aunt fans, however, fan club culture is natural because they grew up listening to popular songs and imitating celebrities back in the ’90s.”

“With the aid of digital gadgets and a wireless environment, consumers can participate in the production process in every industry these days. In that sense, fans are the ones who participate in producing popular culture,” Kim said.

“It’s ideal that fans are no longer passive, but they try to interact with their stars. When they make their voices heard, [entertainment agencies] will produce cultural products catering to the needs of fans.” 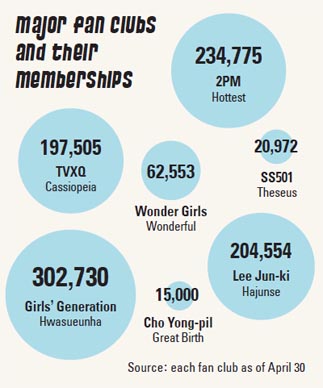 * About 2,000 fans of 2PM staged a series of demonstrations in front of JYP Entertainment, located in Cheongdam-dong, southern Seoul, from September 2009 to March this year against JYP’s decision to oust former member Park Jae-beom.

* An association of fan clubs of TVXQ filed a petition in August last year with the National Human Rights Commission of Korea, saying a contract between the band members and their agency SM Entertainment was unfair. According to the contract, band members can’t leave the company for 13 years.

* Fans of singer Seo Tai-ji participated in public hearings organized by the National Assembly to improve music copyright. They also took legal action against a singer who parodied Seo’s songs.

* Fan clubs of singer Min Kyung-hoon prepared about 200 lunch boxes for staff members working at a concert in April.

* Fan clubs of G-Dragon, a member of Big Bang, purchased boxes of his first single and handed out CDs to reporters and broadcasting officials to promote the album last August.