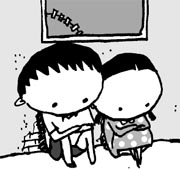 In August 1942, Nazi soldiers stormed into an orphanage in a Jewish settlement in Warsaw, Poland. The elderly director of the orphanage, who was in his 60s, did not want to see the children being dragged away, so he asked the over 190 children in his custody to dress in their best clothes and together they marched to the railway station. It looked as if they were going on a picnic. That couldn’t have been further from the truth.

The train’s final destination was the Treblinka extermination camp and its notorious gas chambers. The director had been offered the opportunity to escape, but he declined, refusing to leave his children.

This is the story of Janusz Korczak, a Jewish Polish children’s author and pedagogue.

Korczak sacrificed his life to help children neglected by society, rejecting the comfortable life of a medical doctor in order to practice the noble ideal that “all children of the world deserve to be loved and respected.”

To commemorate the 100th anniversary of his birth, the United Nations designated 1979 as the “International Year of the Child.” Ten years later, in 1989, the UN Convention on the Rights of the Child was adopted by the UN General Assembly.

These acts are proof of Korczak’s impact on the world.

The pioneer of the children’s rights movement in Korea was writer Bang Jeong-hwan, whose pen name was Sopa. He invented the word “eorini,” adding the word “child” to the lexicon, and initiated efforts for a Children’s Day in Korea in May 1923. The declaration he and his eight supporters adopted at the time said: There should be homes and social facilities where children can learn in peace and play with joy. The spirit of the declaration was succeeded by the Children’s Charter adopted in 1957, which declared that children should not be mistreated or neglected and that children should be protected from danger and harmful social environments.

Humans are not the only ones who protect their young. In the animal kingdom, if lions or crocodiles prey on a young elephant, the adult elephants protect the young animal by forming a circle around it. A young elephant is raised by its mother until the age of 3 or 4. If the elephant’s mother dies before it reaches that age, other female elephants raise it.

Yesterday was Children’s Day in Korea, a day when we honor our children. But there are still many children who could not enjoy the day fully. It is said that there are more than 1 million children who are without protection due to poverty and family division.

If society neglects the suffering of children who are abandoned by their families, we must take their suffering as our own. We must honor the legacy of people like Korczak and Sopa by giving our children the care and attention they deserve.