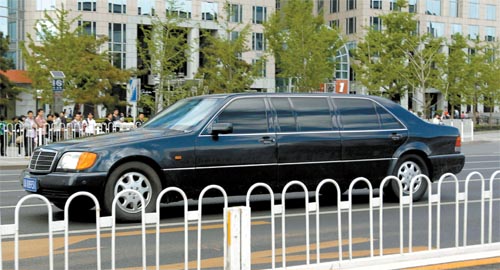 A vehicle believed to be carrying North Korean leader Kim Jong-il on Chang’an Avenue in Beijing yesterday. It was the only vehicle in the North Korean convoy that was heavily tinted and armored. Kim, 68, with thinning hair, a slight limp and gaunt after a suspected stroke in 2008, was flanked by tight security after his armored train crossed into China on Monday and he arrived via motorcar convoy in Beijing yesterday. [REUTERS/YONHAP]


North Korean leader Kim Jong-il arrived in Beijing yesterday, after making a stopover at the nearby port city of Tianjin. Kim, who arrived in Dalian in northeast China Monday, was expected to meet Chinese President Hu Jintao last night and possibly attend a dinner in his honor.

Kim, who reportedly has a fear of flying, traveled nearly 12 hours overnight in his armored train from Dalian to Tianjin. After a brief stay in Tianjin, the train arrived at the Beijing South Station about half past noon, Korea time.

Kim didn’t get off the train, however. The reclusive leader instead traveled in a vehicle convoy and reached Beijing about four hours after the train. Tianjin is about 150 kilometers (93.2 miles) southeast of Beijing.

As was the case in Dalian, security was tight in Tianjin and Beijing in the morning. Trains from Dalian, Dandong and other cities bound for Beijing were delayed, and the Beijing South Station was closed to the public by police. Traffic was halted on the road connecting Tianjin and Beijing.

Kim, 68, is likely to have more meetings with Chinese officials today.

Kim and Hu have held three summit meetings so far and they last met in January 2006 in Beijing.

Kim was more visible in Dalian than in Beijing yesterday. He was photographed entering and leaving a downtown Dalian hotel. Kim was expected to reach Beijing by train by around 6 a.m. local time but instead made a surprise stop in Tianjin.

A diplomatic source speculated that Kim may have intentionally made himself more visible in Dalian than in Beijing.

“Kim was in Dalian to try to bolster China-North Korea economic cooperation and attract Chinese investment, and getting himself in the media could send a message that he cares about the North Korean economy,” the source said. Dalian is the logistical center of northeast China, which could serve as a development model for North Korea.

“But in Beijing,” the analyst said, “Kim would mostly deal with security issues, such as the six-party talks and even the Cheonan sinking [for which North Korea is a suspect]. He must have decided he’d be better off out of the spotlight.”

The Tianjin stop too appeared to be related to economic and investment interests. Tianjin is one of China’s largest cities and its port handled 310 million tons of cargo in 2007 to rank sixth among world’s ports. Tianjin is also home to major economic development zones called Binhai New Area and Tianjin Economic-Technological Development Area. This was Kim’s first visit to Tianjin in six years.

Kim visited the Binhai area with the usual tight security. A highway connecting Tianjin and the Binhai district was closed off for three hours starting at 7 a.m. yesterday. The district is also home to dozens of South Korean companies, and South Korean business owners there complained some of their employees couldn’t arrive at work on time.

When Kim last visited Binhai in April 2004, it was still a startup. In the six years since, the Binhai New Area, spread over 2,270 square kilometers (560,930 acres), has emerged as a key economic zone and attracted investments from Motorola, Coca-Cola, Airbus and South Korea’s Samsung Electronics.

The Binhai New Area’s official Web site states that 85 Fortune 500 companies have set up bases in the district, and there are dozens of government engineering centers and corporate technology research and development centers.

North Korea is trying to develop its northern port of Rajin and granted China access to a dock for the next decade. China expected the move to help its underdeveloped northeast provinces grow, and North Korea counted on reaping economic benefits, too.

Analysts have suggested that on Kim’s trip, China, North Korea’s main ally, would provide much-needed economic assistance to North Korea, and the North, in exchange, would return to the six-party talks.

South Korea has maintained there will be no six-party talks before the completion of the Cheonan probe. A high-ranking South Korean Foreign Ministry official said yesterday there’s no change to that stance.

“Depending on the result of the investigation, we may have to take some action,” the official said. “We have to find out who was responsible. And China fully understands where we come from.”

South Korea has expressed its disappointment in China’s receiving Kim just three days after South Korean President Lee Myung-bak’s summit with Hu. Chinese Foreign Ministry spokeswoman Jiang Yu was noncommittal when asked if China would support South Korea at the Security Council if the North is found responsible for the Cheonan sinking.

“Given the ongoing investigation and pending result, I could not answer this hypothetical question,” Jiang said.