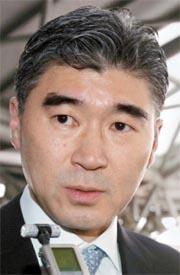 WASHINGTON - Sung Kim, chief U.S. negotiator to the six-party talks on North Korea’s nuclear weapons program, said at a recent forum that the stalled negotiations will not resume before the completion of the probe into the sinking of a South Korean warship, participants at the forum said here yesterday.

According to the participants, Kim also said if North Korea is found responsible for the sinking of the Cheonan on March 26, the other five nations - the United States, South Korea, Russia, Japan and China - will discuss a joint response.

Kim spoke yesterday, Korea time, at the fourth annual Seoul-Washington Forum co-hosted by the Brookings Institution and the Korea Foundation.

Those who attended the forum, held behind closed doors, said Kim stressed the top priority is to find out what really happened to the Cheonan. North Korea is suspected of launching a torpedo attack on the warship.

Kim was also quoted as saying that if North Korea is found guilty of attacking the Cheonan, the future of the six-party talks will be determined only after the five other members discuss their joint countermeasure.

Participants said Kim was asked what the United States would do if North Korean leader Kim Jong-il, currently visiting China, declared the North would return to the six-party talks, which were last held in December 2008. Kim responded that the six-party talks would not take place until the Cheonan investigation is complete.

The U.S. government has yet to confirm Kim Jong-il’s trip to China, but the State Department yesterday said it hoped China would persuade North Korea to return to negotiations.

“We would trust that if there are meetings with high-level Chinese officials, that they will stress, as we do, that the only route forward for North Korea is through the six-party process,” said State Department spokesman Philip Crowley.

“There are things that North Korea has to do before we can have meaningful conversations, including taking affirmative steps on denuclearization.”

Commenting on the timing of the six-party talks’ resumption in relation to the Cheonan probe, Crowley said he believed the investigation would be finished before North Korea decided to return.

“But I would anticipate the South Korean investigation being finished relatively soon. I just don’t know what decision North Korea’s going to make.”

Prospects for the resumption of the six-party talks have been on a roller coaster since last summer. In protest of international sanctions imposed after its nuclear test last May, North Korea declared the six-party talks “dead” and vowed it would never return.