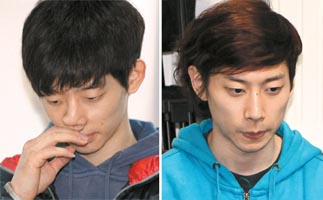 Olympic medalist Lee Jung-su, left, and Kwak Yoon-gy, right, have lost the right to race in skating competitions for three years, while national coach Chun Jae-mok has been banned from the sport. [JoongAng Ilbo]

Two Korean Olympic short track speed skaters have been suspended for three years for their role in manipulating team rosters.

The Korea Skating Union, the nation’s governing body of the sport, handed down the punishments on Lee Jung-su and Kwak Yoon-gy. National team coach Chun Jae-mok received a lifetime ban.

The union decided on the penalties last Friday but decided not to disclose them at the time. It instead said it would notify the individuals by mail, and a member of Lee’s camp confirmed yesterday the skaters have been suspended for three years.

The scandal has been marked by “he said-she said” allegations among the skaters and the coach.

During last year’s Olympic team trials, Chun said he asked Kwak to help Lee make the squad. Lee, who at the time didn’t have enough points to make the team, begged Chun for help, the coach said.

According to a video clip of the trials, Lee lost his balance during the men’s 1,000-meter heat, but Kwak held him up from behind and fell to the ice himself.

Lee won the 1,000-meter at the trials and both skaters made the Vancouver team this February. After Lee won the gold in the 1,500-meter event, Chun said he asked Lee to let Kwak skate in the 1,000-meter race for his chance at glory. Lee at first refused but later agreed to allow Kwak, a 500-meter specialist, to enter the 1,000 meters.

But the team’s manager, Kim Ki-hoon, didn’t want to make the last-minute change and kept Lee in for the 1,000 meters. Lee won his second Olympic gold there.

As a trade-off for racing the 1,000 meters in Vancouver, Lee agreed to skip the world championships in March to give Kwak a chance at a title. The Korean Olympic Committee last month charged that Chun forced Lee to withdraw from the event, a claim Chun has denied.

Later in April, a special investigation team made up of officials from the Korea Skating Union, the Korean Olympic Committee and the Ministry of Sports recommended a one-year suspension for Lee and Kwak, and a lifetime ban on Chun.

An official at the union said the final penalty was stiffer because Lee and Kwak “showed no remorse” for their actions during the investigation.

“Most of us in the union’s disciplinary committee are former short-track skaters and we wanted to protect these guys,” the official said.

“But the skaters and their parents didn’t grasp the gravity of the situation and only kept making defensive claims.”

Though they’re both 20 years old, the suspension essentially spells the end of Lee’s and Kwak’s careers because of the deep talent pool in Korea.

They can ask for a review of the penalty within seven days. If they are still unhappy with the new punishment, then they can appeal to the Korean Olympic Committee.