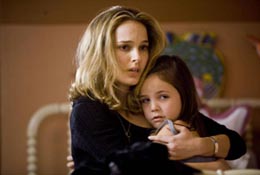 Based on Susanne Bier’s 2004 Danish film “Brødre,” Jim Sheridan’s film “Brothers” tells the story of Marine Captain Sam Cahill (Tobey Maguire), his wife Grace (Natalie Portman) and his brother Tommy (Jake Gyllenhaal). After receiving orders to ship out for his tour of duty in Afghanistan, Sam prepares to leave his supportive wife and two elementary-school-age daughters. Before taking off, he welcomes his screw-up brother Tommy, who has just finished a prison stretch for robbing a bank, into his home. While overseas, Sam’s helicopter gets shot down and everyone on board is presumed dead. Back home, Tommy tries to take care of Grace and the girls, and the two become close. Eventually, Sam is rescued and he returns home, but he is silent and detached and he becomes convinced that his brother and his wife have had an affair.

Produced by Pixar Animation Studios and released by Walt Disney Pictures and Buena Vista Distribution in 1999, this animated film is shown in 3-D.

The Song of Sparrows (All)

Directed by Majid Majidi, director of the film, “The Children of Heaven,” this movie tells the story of Karim (Mohammad Amir Naji), a man who works on an ostrich farm.

After one of the birds runs away from the farm, Karim is blamed for the loss and fired. The problem is that he needs money to repair his daughter’s broken hearing aid before her crucial exams, so he begins to take every job he can get. One day, when he heads into town to have the hearing aid repaired, he offers a lift to a wanderer and decides to jump into the taxi business. But as his connection to the people of the city grows stronger, his generous and honest nature begins to transform.

This film consists of three segments containing stories about first love: “Paper Crane,” “Come On Just Once, Maybe Next Time” and “Leap of One’s Heart.”

Paper Crane depicts the relationship between a man, Hyeok-soo (Kim Seong-gon), who works for a vicious loan shark, and a woman, Seo-yeon (Lee Cheong-ah). The two meet and eventually fall in love, but when Hyeok-soo finds out that Seo-yeon owes his boss money, things begin to change.

In Come On Just Once, Maybe Next Time, Yong-sik (Kim Dong-gon) meets his ex-girlfriend a year after their break-up, which occurred because he thought physical affection is a must between lovers and she didn’t.

In Leap of One’s Heart, Soo-hee (Lee Ga-yeong) travels to the coast to spend the night in a particular room at a particular inn. When she arrives the room is already occupied so she is forced to get another room. Later, Soo-hee learns that the person occupying the room, Hye-jeong (Jeong Ae-yeon), is there with the ashes of her dead husband. Soon, Soo-hee figures out that the dead man is her first love. 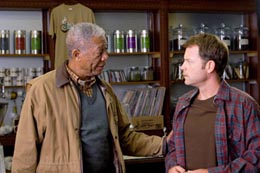 Based on Charles Baxter’s novel, director Robert Benton (“Kramer vs. Kramer”) brings the magical, mysterious and sometimes painful incarnations of love to the big screen.

In a tight-knit Oregon community, Professor Harry Stevenson (Morgan Freeman) watches from his seat at a coffee shop as love and attraction stir up mischief among the town’s residents.

One of these is Bradley Smith (Greg Kinnear), the coffee shop owner, who is a die-hard romantic but unlucky in love. He has a habit of looking for love in all the wrong places, including with his current wife Kathryn (Selma Blair). Then there’s Diana Croce (Radha Mitchell), a real estate agent caught up in an affair with a married man with whom she shares an ineffable connection. Meanwhile, the beautiful newcomer Chloe Barlow (Alexa Davalos) defies fate by romancing the troubled Oscar (Toby Hemingway). And then there is Harry himself, whose adoring wife is looking to break through his wall of grief after the wrenching loss of a loved one. All of these personalities come together in one story in which no one escapes being bent, broken, befuddled, delighted and ultimately redeemed by love.