Actress ready for next challenge

Actress ready for next challenge 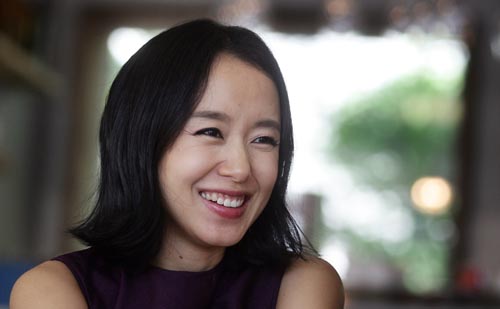 It was just three years ago that Korean actress Jeon Do-yeon won the best actress award for her role in Lee Chang-dong’s “Secret Sunshine” at the 2007 Cannes International Film Festival. The actress received high acclaim from critics and audiences around the globe for her earnest portrayal of a broken woman who copes with the deaths of her husband and child.

This May, Jeon will once again compete for best actress honors when her new film “The Housemaid” premieres at the 2010 Cannes International Film Festival. The film is a Korean thriller directed by Im Sang-soo that is a remake of Kim Ki-young’s 1960 film by the same name. The story revolves around a housemaid who has an affair with her wealthy employer.

Kim’s 1960 film received rave reviews in and outside of Korea and has recently been restored by the Korean Film Archive with support from the World Cinema Foundation.

For Jeon, the decision to sign on to the film wasn’t easy. “I hesitated a lot before choosing to participate in this film,” said the 37-year-old actress, for whom this is the first film following the birth of her daughter last year. “It’s extremely gratifying and meaningful to think that the film will receive recognition for its cinematic quality.”

She says the three-month production period was a happy and fulfilling experience, despite the challenge of having to portray the naive housemaid, Eun-yi.

“Eun-yi is a pure woman, true to her instincts,” Jeon said. “Initially, I didn’t understand the nature of that absolute innocence. But at one point, I suddenly realized that I was capable of becoming Eun-yi.”

“Whenever people say that I’m at the peak of my career, I find myself growing more and more determined to prove that I still have more to express,” she said. “I want to show that I have the potential to mature and develop as an actress.”

Despite the pressure to live up to the high expectations of both Korean and overseas audiences, Jeon appeared amazingly serene during our interview.

“I’m not someone who feels the need to express increasingly violent emotions or do more revealing scenes. Rather, I assign myself goals that I must achieve on my own.

“My current goal is to prove that I am not an actress who excels only in films that are easy.”

And although Jeon admitted that she would be happy to add to her collection of awards by winning at Cannes, she insisted that her first priority is to remain free of pressure.

“Being invited to one of the world’s oldest and most prominent film festivals is an honor in and of itself,” she said, her face glowing with joy and easy composure.

Eventually, she hopes to hear what would, for her, be the best compliment of all - that the movie was over before they knew it. The actress exuded confidence when she stated her belief that the positive reviews will pour in.

The film opens on May 13 in Korea.