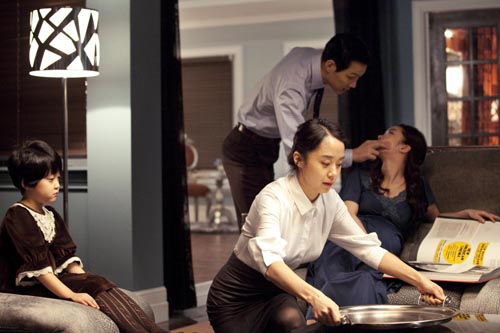 A scene from “The Housemaid” (“Hanyo”) Provided by Sidus FNH

Director Im Sang-soo described his new film “The Housemaid” (“Hanyo”) as a high-quality makjang drama when he was asked to define his film at a press conference last month. “Makjang” literally means “blind end,” but if the word is used as an adjective to classify a genre of drama or film, it refers to a dark story containing elements such as adultery, sex, revenge, betrayal and violence.

Im was confident when he said the film would show what a thriller is supposed to be.

Unfortunately, The Housemaid has failed to serve either purpose.

The film does fall into the makjang category, but the “high quality” he promised is missing.

Im’s rendition of The Housemaid follows the basic plot of the 1960 film, directed by the late Kim Ki-young, on which it is based: Eun-yi (Jeon Do-yeon) becomes a housemaid for a wealthy family and eventually has an affair with the husband, Hun (Lee Jung-jae), who is a composer. After Hun’s wife Hae-ra (Seo Woo) discovers their relationship, the rest of the story is rather predictable: Eun-yi becomes pregnant but is forced to have an abortion.

The film depicts the ugly side of humanity, employing a string of disturbing characters to tell the story. Although these people live in an expensive mansion and sip the finest wine, they are all cheap, slick, power-hungry - and none of them feel any guilt about harassing the weakest person among them: the housemaid.

These characters are unsavory, but in the film there is nothing that elevates them above the ordinary. Except Hun.

In previous films, Lee has failed to make a strong impression, but this time he has created a contemptible character worth remembering. In one scene, he looks at Eun-yi and gives her a disarming smile, but when he learns that she is pregnant, he asks, “So you’ll get rid of the baby?” as if he’s asking what’s for dinner. And then he goes back to playing the piano.

Jeon Do-yeon’s portrayal of Eun-yi is somewhat disappointing, not because she isn’t a good actress but because of the way the character was written.

In previous interviews with the local media, Jeon confessed she had trouble understanding her character’s extreme naivete. So did I. The script, written by director Im, leaves us wondering: Why did she get divorced? Why did she drop out of college? How can she be so naive? With so little information about Eun-yi, it was hard to immerse myself in the movie for more than an hour.

Still, Jeon shines in a couple of scenes, especially when she is shown sipping a pouch of hanyak (oriental medicine). In that scene, she is like a mouse in a huge mansion that has no clue about its destiny.

While I was watching the movie, I kept wondering what would have happened if Im and writer Kim Soo-hyun hadn’t had a big fight during the production period. Maybe Kim, who is known for her catty lines, could have saved the film from being dull.

Kim is one of the most famous television screenwriters in Korea, and known for being a bit of a drama queen. She was hired to write the script but withdrew from the project after Im handed her a revision that she said bore little resemblance to what she had turned in.

In the end, the film is neither a makjang film nor a thriller but rather an ordinary tale of adultery. For me, Bong Joon-ho’s “Mother” (2009) was far more thrilling than this.