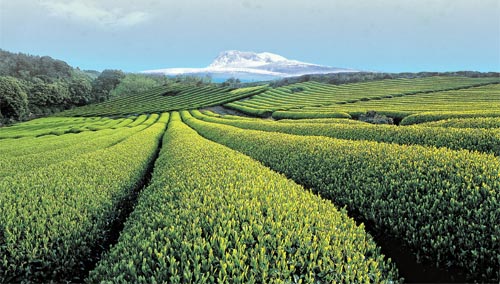 Against the advice of his employees, Amorepacific founder Seo Sung-hwan invested in a plot of barren land on Jeju Island in the 1970s, eventually turning it into the Seogwang Dawon tea plantation, above. [JoongAng Ilbo]


JEJU ISLAND - The weather here is unpredictable and can change in a hurry. When I arrived at Jeju Airport it was raining, but by the time I made it to Seogwang Dawon, a tea plantation on the western side of the island, the sky was clear. The lush green of the young tea leaves, glittering in the fresh sunlight, was an impressive sight.

The Mount Halla region of Jeju Island is the ideal place to cultivate green tea, thanks to a mild climate, high precipitation and fertile land. It’s these ideal conditions that cultivators hope will put Jeju on the international green tea map with Shizuoka, Japan, and Zhejiang, China. At 661,160 square meters (163 acres), Seogwang Dawon is the biggest tea plantation in the country.

“The area you see now was once a wasteland. It was that way for over 30 years before we cultivated the land,” said Park Sung-min, an official at Amorepacific, the cosmetics unit of Taepyongyang Corporation, which owns the plantation.

According to Park, this was once one of three large plots of land on Jeju deemed useless and infertile - until 1984, when the Seogwang Dawon opened.

“The late Seo Sung-hwan, the founder of Amorepacific, created the plantation,” explained Lee Jung-dae, a researcher at Seogwang Dawon. 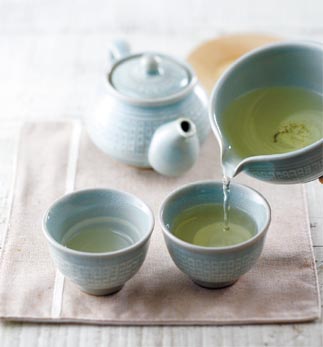 Seo was a regular tea drinker, and his fondness for beautiful Japanese tea gardens motivated him to create one on Jeju Island. Prior to the 1970s, whenever Seo went to Japan on business trips for cosmetics ingredients and perfume, he was always served green tea by his hosts. Koreans, on the other hand, mostly served Japanese business guests American coffee purchased at American military surplus stores.

Determined to spread tea culture in Korea, Seo began planning a green tea plantation starting in the early 1970s. He was in his 50s at the time, and all his employees were said to have strongly protested the move. Since it takes at least three to four years to build a plantation before the first harvest, it would mean more than a decade before the operation became profitable, if it ever did at all.

But Seo put all the questions aside and cultivated the land. Thirty years later, Amorepacific operates three green tea plantations at Dosun, Seogwang and Hannam. Those three locations now account for 5 percent of the land area of all Korea’s tea plantations combined, and Amorepacific plantations produce 23 percent of all the green tea harvested in Korea. A total of 700,000 visitors come to the plantation on a yearly basis, 200,000 of them from overseas.

Korea’s tea culture can be traced back to the Silla Dynasty (668-935), but consumption declined quickly during the Japanese colonial period (1910-1945). During the 1960 and 1970s, the demand for black tea spiked, and producers found themselves unable to keep up. Some even dyed leaves from camellia trees and sweet potato plants and passed them off as black tea. When the incident was reported in the media, it drove consumers toward coffee instead, a trend that has never reversed, leading to the appearance of instant coffee packets in offices across the country. 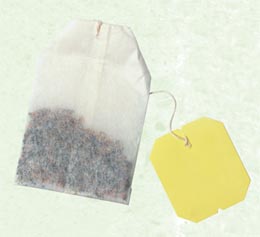 With the decrease in tea consumption, many plantations went out of business. But amid this market contraction, Amorepacific opened its plantations.

Seo invested in it without hesitation, and over time, the withered tea market began to pick up. Other plantations eventually opened in Boseong and Gangjin in South Jeolla. Finally, the recent “well-being” trend had consumers demanding healthy, organic products, and Amorepacific’s tea brand O’Sulloc has designed its marketing to match, touting the beverage’s antioxidants and other health benefits, supposedly lowering blood pressure and helping protect against diabetes.

The company’s green tea has also been used in cosmetics, where it claimed the extract has stress-relieving, anti-aging properties.

The increase in popularity of green tea in tea bags contributed to sales of 200 billion won ($179.4 million) in 2006. But news that a few tea producers used pesticides on their plantations interrupted growth. Amorepacific decided to tackle the problem head-on, switching to completely organic farming methods for all their tea products.

In the first year using the new techniques, production dropped 40 to 50 percent.

“Our production figures have dropped by a total of 20 percent since we switched to organic farming,” said Yoo Joo on the O’Sulloc research team.

O’Sulloc said its organic green tea is roasted several times to enhance the flavor and aroma, then the leaves are rubbed and roasted three to four more times.

No pot? No problem

Koreans on average consume 60 grams of tea each year, compared to 1,800 grams of coffee.

One reason for the gap may be the idea that tea is more difficult to prepare - boiling water, filtering leaves - while to make instant coffee all one needs to do is pour powder from a packet into hot water.

The Japanese have a complex set of rituals used in tea ceremonies, and Koreans have darye or “tea etiquette,” which calls on the drinker to boil a large pot of water and then use another smaller pot to brew the tea. Then the hot tea is poured into a cup with a cover to cool, with smaller cups also used to sip. There’s meaning behind each step.

“The small teapot represents family. The handle represents the head of the household, the small handle on the cover is the mother, the opening where the tea is poured represents the son, and the saucer, the daughter,” explained Kim Ji-yeon, a tea sommelier at the O’Sulloc Tea Museum.

Just as a problem with one member can create a larger issue for the entire family, the pot cannot serve its true purpose if a problem arises with one of the parts.

Another misconception is that tea brewed in bags doesn’t taste good enough.

“Most say that tea brewed from tea bags doesn’t taste good, but using proper methods can lead to a good flavored cup of tea [even using a bag],” explained Kim.

Avoid tap water, and use a mug or teacup instead of a paper cup. After letting the tea bag sit in the hot water for about 20 seconds, swirl the liquid 10 to 15 times in both directions and take the tea bag out and drink.

A flight from Gimpo Airport near Seoul to Jeju Island takes about 45 minutes. Major airlines like Korean Air and Asiana Airlines offer daily flights to the island, but smaller companies like Jeju Air and Jin Air offer cheaper fares.