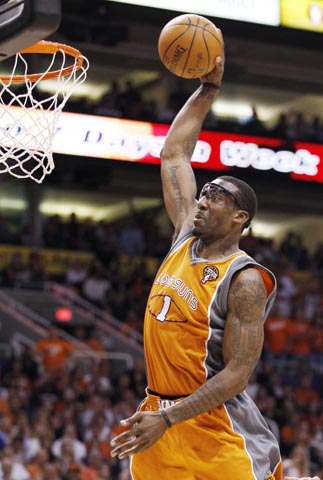 The Phoenix Suns’ Amare Stoudemire goes in for a dunk against the San Antonio Spurs during the second quarter of game two on May 5. [AP]

PHOENIX, Arizona - The Phoenix Suns shrugged off a sluggish start to beat the San Antonio Spurs 110-102 Wednesday, protecting their home court as they took a 2-0 lead in their NBA Western Conference semifinal playoff series.

Amare Stoudemire was just five-of-16 from the field but finished with 23 points and 11 rebounds, and Channing Frye connected on five of six three-point attempts for the Suns, who played in their Orange “Los Suns” jerseys in honor of the Cinco de Mayo holiday and in protest of Arizona’s controversial new immigration law.

Steve Nash and Jason Richardson scored 19 points each and Grant Hill chipped in 18 for the Suns, who had to grind at the Spurs’ pace until they started hitting from long range.

The Suns started just one of seven from three-point range, but then made eight of 12.

Tim Duncan had 29 points and 10 rebounds and Tony Parker added 20 points for the Spurs.

George Hill again got the nod as San Antonio’s starting point guard with Parker coming off the bench. Parker then started the second half and played a total of 36 minutes.

“To me it was a great team victory,” Suns coach Alvin Gentry said, but added: “At the end of the day, we really haven’t done anything except exactly what we’re supposed to do, which is hold serve at home.”

San Antonio’s Manu Ginobili made only two of eight from the field - just one of two in the second half - although he handed out 11 assists.

San Antonio out-shot Phoenix 51 percent to 42 percent, but the Suns out-rebounded the Spurs 49-37, and led in offensive rebounds 18-7.

Phoenix trailed the whole first half, but managed to even the score 51-51 at the break.

“Jared, I thought, was the player of the game,” Nash said. “He came in and got a bunch of offensive rebounds, hustle plays.”

“I thought in first half that Jared Dudley changed the whole game,” Popovich said. “He came in and he was a monster. He was committed to the board and it was infectious.”

Popovich said Frye had the same effect in the second half.

“If he’s going to make those threes, that really makes their spacing work,” Popovich said. “They were contested - he might have had one that was open - and he knocked them down.”

The Suns led 78-76 heading into the fourth quarter.

Parker drained a three-pointer and Duncan dunked off a rebound to trim the deficit to 103-97 with less than three minutes left, but Nash and Richardson responded with baskets to squash any chance of a Spurs rally.

“Every time they needed a shot it seemed like it went down for them,” Duncan said.

The winners of the series will face either the Los Angeles Lakers or Utah Jazz in the conference finals.