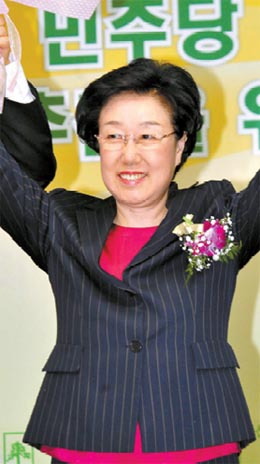 Han, 66, will compete against incumbent Mayor Oh Se-hoon of the Grand National Party in the June 2 election. If elected, Han, who served as the first female prime minister of Korea, will be Seoul’s first female mayor.

The election commission of the Democratic Party selected its candidate through a public opinion poll, surveying 2,000 voters in Seoul. Former lawmaker Lee Kye-ahn ran against Han in the primary.

“Lee Myung-bak and Oh Se-hoon have destroyed Seoul for the past eight years, but I will restore the city for the public,” Han said in her acceptance speech. “Support me to build a city that will invest in the people and their lives.”

Han also stressed that the opposition parties must unite in the June local elections to defeat the ruling Grand Nationals. “The liberal forces must unite to issue a stern warning to this arrogant administration,” she said, “and bring transformation and hope to the people.”

Han is a well-known democracy activist and women’s rights advocate. She began her political career in 2000 when the Democratic Party gave her a legislative seat as a proportional representative. In 2004, Han was re-elected to represent Goyang’s Ilsan districts, defeating Grand National Party heavyweight Hong Sa-duk.

She tried to run for president in 2007, but lost her party’s primary. She also made a bid in legislative elections in 2008, but lost again.

Han announced her bid to run for Seoul mayor as she was investigated on charges of receiving bribes from a local businessman while she was prime minister. She was acquitted in her first trial although a government appeal is pending.

Han and Oh will have a public debate today. Their contest is seen not only as a battle of the sexes but also a contest between an incumbent mayor and a former prime minister. Oh represents the conservatives and the Lee administration and Han represents the liberals and the Roh administration.

“My strengths are achievements and experience as mayor for the past four years,” Oh said yesterday in a radio interview, “as well as transparency and future vision. I believe Han had less time to prepare for this election because she was too busy being investigated and undergoing her trial.”