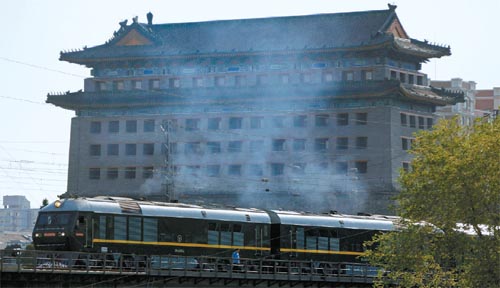 
North Korea leader Kim Jong-il offered to return to the stalled negotiations on shutting down his nuclear weapons program during his meeting with Chinese President Hu Jintao in Beijing, according to sources there.

After arriving in the Chinese capital Wednesday, Kim had a meeting for about an hour and a half with Hu that evening at the Great Hall of the People, the sources said. Kim then attended a three-hour dinner in his honor hosted by Hu, sources added. A special train carrying Kim’s delegation left Beijing around 4:30 p.m. local time yesterday.

Details of conversations between Kim and Hu weren’t immediately available yesterday. Neither North Korea nor China had confirmed the Kim-Hu meeting by press time last night. Details of Kim’s trip will probably be reported by North Korean state media after he returns to Pyongyang.

According to various sources in Beijing, however, Kim told Hu that North Korea was ready to return to the stalled six-party denuclearization talks. Kim had been expected by analysts to make the offer in exchange for economic aid from China.

The United States said this week it hoped China could persuade North Korea to return to negotiations. The last six-party sessions were held in December 2008.

U.S. State Department spokesman Philip Crowley acknowledged yesterday, Korea time, that the U.S. was aware of Kim’s trip to China and said, “We have shared our views with China in anticipation of this meeting.” Crowley didn’t elaborate.

“There are things that North Korea has to do if this process is going to move forward,” Crowley said. “Let’s see what they’re prepared to do.”

South Korea maintains the six-party talks will not resume until the completion of the investigation into the sinking of the South Korean naval vessel Cheonan. Blue House spokesman Park Sun-kyoo reiterated the stance yesterday, and Foreign Ministry spokesman Kim Young-sun said yesterday Seoul’s allies all share a desire for a thorough investigation.

North Korea denied its involvement but remains a suspect in the March 26 sinking, which investigators have tentatively concluded was caused by an external blast.

Crowley said yesterday the United States is “fully supportive” of South Korea’s investigation. “Obviously, when that investigation is completed, we will all draw conclusions that will have potential implications,” he said.

But since the beginning of Kim’s China trip on Monday, analysts in Seoul have feared that once North Korea showed a willingness to come back to the six-party talks, China would revive them and conduct them without any regard to the Cheonan investigation or its final findings. China is the chair of the six-party negotiations.

China is North Korea’s largest ally and benefactor. Analysts and diplomatic sources here like to refer to the North Korea-China tie as a “special one” forged by the blood shed by both their armed forces during the Korean War.

South Korea has been making diplomatic approaches to China emphasizing the gravity of the Cheonan case and attempting to secure its support if the incident ever reaches the United Nations Security Council.

The South has said if North Korea is found responsible for sinking the ship, raising it at the Security Council would be an option. China is one of five permanent members with the right to veto, and unanimity by the five - the United States, Britain, Russia and France are others - is required to pass binding resolutions.

But officials here admit it may be difficult to get China’s support. Last year, China joined others in punishing North Korea for its nuclear test, but that action was viewed as a threat to international security. If North Korea did attack the Cheonan, the sinking could be regarded by China as merely a regional or bilateral issue between the two Koreas. Given its ties with North Korea, China could be reluctant to help pass a resolution that includes extra sanctions.

“There has been a great deal of tension off the West Coast [where the Cheonan sank] but the South Korean and U.S. forces have had their joint military drills there,” said a Foreign Ministry official recently. “China could accuse us of raising tension in the waters. North Korea has taken great offense to the exercises.”

South Korea was apparently displeased with China’s receiving Kim before the completion of the Cheonan investigation.

“The two matters [Kim’s visit and the Cheonan investigation] are separate,” Jiang said yesterday. “As far as I know, South Korea has not yet lodged an official complaint.”