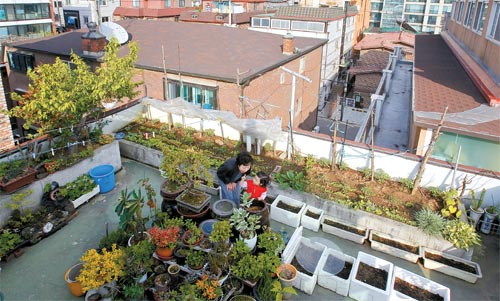 In Kim Moo-sook, seen here with her granddaughter Dong-min, grows 100 types of vegetables and fruit trees at her rooftop garden in Bangi-dong, Seoul.

In a city as crowded as Seoul, it can be difficult to find a green space. But there are hidden patches of life, such as at a rooftop garden that has sprouted up at a neighborhood day care center and at another garden plot that sits atop the home of a horticulture instructor. In both places, the people who make the gardens grow are finding that they are getting more than the rich supply of crops they now pull out of the ground. They are inspiring the communities around them and changing the way they live.

On April 29, 30 children gathered on the roof of the Hannaedeul Day Care Center in Junghwa-dong, Seoul. The collective anticipation in the air was palpable as the children prepared to plant lettuce and potatoes in their very own rooftop vegetable garden, their pride and joy.

Small hands moved busily, taking meticulous care to plant and cover up every inch of the potatoes in the soil. On one side of the roof, children carried lettuce seedlings over to the garden.

One child declared that he would grow lettuce to share with his friends and teachers. Another child flashed a wide grin as he commented that planting potatoes was just as fun as playing online games.

The roof of the day care center looks like a wildlife forest. In fact, it contains 20 kinds of vegetables and fruits including cherry trees, peppers, fatsias and blueberry trees. Every one of the plants had been lovingly cultivated by the teachers and children. 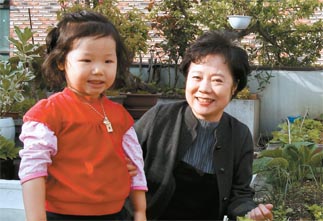 Down below, a mini rice field of one pyeong sprawls on the parking lot in front of the main entrance. Every year, this field delivers enough rice to fill a cauldron. In the future, there will be rice, tomatoes, cucumbers and corn.

The idea of the rooftop garden was the brainchild of the center’s director, Yoo Hye-joo, 52. Appointed in 2002, Yoo’s ultimate goal was to allow the children to feel for themselves the powerful experience of growing living things and taking responsibility for them. Her theory was that city children in particular are in need of a good ecological education. Having learned farming techniques from her mother-in-law, Yoo started by creating flower boxes out of abandoned flower pots and Styrofoam. The number of boxes increased as she began planting lettuce, paprika and peanuts alongside the children under her care.

To her surprise, the children expressed a level of interest in their crops that far exceeded her expectations. At one point, a “urine war” commenced when Yoo announced she would collect urine, which can be used as a nitrogen-rich fertilizer. Each child declared that their urine the best and clamored to be chosen for the honor. This was enough for the director to realize the degree of devotion the children had developed for farming activities.

Still more surprises awaited Yoo. Whereas before the children had shied away from vegetables during mealtimes, they suddenly began asking for greens like spinach and lettuce.

“Every one of the children ate the crops they had helped raise. It was as if their dislike of eating vegetables melted away,” she said. Due to these heartening results, most of the parents, who initially expressed concern that the children were being deprived of study time, are now fully supportive of this farming experience.

The day care center also has a “tea meditation” time. According to Yoo, farming has not only improved the children’s eating habits but has helped to increase their concentration levels as well. Although most children under seven are at an age where they can be easily distracted, Yoo said that the children not only willingly drink green tea but participate well during the meditation period.

Beginning last year, the day care center started receiving financial support from the Seoul Agriculture Technology Center, with which it extended the size of the rooftop garden and diversified the types of crops grown.

“There are plenty of organizations and people willing to support urban agriculture. What with the large number of books that contain information and tips on urban agriculture, it’s easy to reap a satisfying crop.”

Yoo said that once she saw for herself the effects that the farming activities were having on the mental and physical well-being of the children at the center, she began recommending that residents living near the day care center start their own gardens, too.

“Even without a rooftop or yard, you can create a small garden. For example, lettuce actually grows better in the shade than sunlight, so it’s a perfect vegetable to grow indoors in a box,” she explained.

Of course, an easy start to farming does not necessarily guarantee a successful harvest.

“The core of farming is one’s ability to raise crops as one would one’s own family,” the director emphasized. 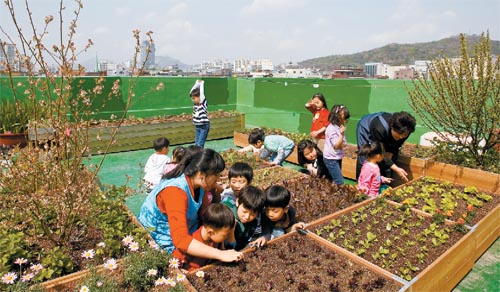 Above and bottom: Yoo Hye-joo and the children at Hannaedeul Day Care Center in Junghwa-dong, Seoul, plant and raise 20 kinds of vegetables and fruits like potatoes, lettuce, and cherries in a rooftop garden created by Yoo in 2002.

Kim Moo-sook lives in a three-story villa in Bangi-dong, Seoul. On her 30-pyeong rooftop, there is a small field divided into sections, with baby tomatoes, cucumbers and pumpkin pushing through the dirt. Styrofoam flowerpots filled with garden balsams and cargana roots adorn the garden with fresh, bright colors.

Kim says her garden is not merely a private space but is there for village residents as well.

“Every autumn, pumpkins ripen in plump rows against the garden walls along with vivid pomegranate berries. Neighbors say it is as glorious as an angel’s garden,” she boasted.

Kim, who works as both a producer of a cooking show and a horticulture instructor, is well into her 12th year of rooftop gardening. Including the years she spent working on a weekend farm, she is an urban agriculturist who has worked in small-scale farming for over 15 years.

“Raising crops is like raising a small child. If you neglect them or lavish excessive care on them, they will wilt or fail to grow well,” she said. 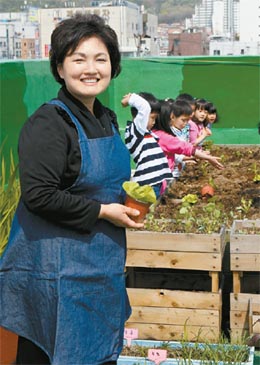 The way she sees it, she is currently raising about 100 sensitive children who require just the right amount of care.

Kim was inspired to try her hand at urban agriculture one day while reminiscing about her childhood spent in Daegu, where a small field decorated the front yard of her home. Her childhood play consisted of planting vegetables, picking wild greens and fishing in the refreshing, clear waters of a nearby river.

When she got married and settled in Seoul, waves of nostalgia for the familiar smell of freshly dug-up dirt arose within her. Hoping to induce a liking for the taste of homegrown pumpkin leaves in her children, she began working at a weekend farm with her neighbors. But because of the long hours it took to go back and forth, the plan was soon abandoned.

That was when Kim was struck with the notion of having a rooftop garden of her own.

“I thought that if there was enough space to cultivate a field near the house, it would be possible to harvest many edible crops,” she said.

Soon after, she had picked out a cottage with a usable roof and convinced her husband to move.

The garden, which started out with a modest selection of flowers and vegetables, now produces enough crops to share with her family and neighbors, and there are leftovers to spare.

Leftover plums and grapes are used to make homemade jam. Wild grapes are made into fermented drinks and served to visitors. In the summer, cicadas screech on the branches of plum and pomegranate trees. In rainy weather, hoards of red dragonflies seek refuge in the garden. Kim said birds even fly in when the grapes are especially ripe.

The rich wildlife blossoming on Kim’s rooftop also brings an endless parade of visitors, who say with fondness that it reminds them of their childhood homes.

Kim’s idea worked wonders not only on her rooftop, but on her family’s eating habits as well.

When Kim visited her eldest son in the army, he asked her to bring a lunchbox of pumpkin leaves and soybean paste, not the pizza and fried chicken requested by his fellow soldiers. Kim’s daughters-in-law drop by her house every Friday to get gardening tips.

“Now my daughters-in-law are eager to bring me the lettuce leaves they’ve grown themselves,” she said.

Another notable change occurred in Kim’s household. Her husband, who initially neglected the garden, is now her most dependable farming partner. Every morning without fail, he makes his way to the rooftop to check on the crops.

And Kim’s relationships with the rest of her family have also changed. On weekends, Kim’s children and their families gather at her home to enjoy hwajeon, which are pan-fried sweet rice cakes cooked with flower petals, and rice wrapped in burdock.

“My children and their families visit me so often that my neighbors ask me whether it doesn’t get tiring for me. But why would it be? It’s my job to make sure that my family eats healthy meals.”

Kim has succeeded in not only cultivating a beautiful garden, but the health and happiness of her family.