The harsh reality of dreams

The harsh reality of dreams 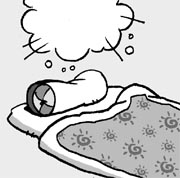 Su Dongpo, the Chinese poet who wrote the famous poem “The Red Cliffs,” took a stroll in the countryside when he was in his later years. An elderly woman recognized him and lamented, saying, “The fame and glory of the past is just like a spring dream!” Perhaps she could see the true nature of life in Su’s time-worn face and idle gait. This story is from “An Episode of a Spring Dream” by Houqing Lu of the Song Dynasty (960-1279).

“The Story of the Nanke Governor” by Li Gongzou of the Tang Dynasty (618-907), tells a similar tale. A man named Chunyu Fen gets drunk and falls asleep. He dreams he is invited to the Land of Hauian, marries the queen and becomes the governor of Nanke. One minute he is on top of the world, only to wake to the discovery that it has all been a dream. The tale is titled “Nanke Dream.”

“Pillow Note” by Shenjiji, also of the Tang Dynasty, tells a similar story about a person who ascends to the top position and wakes to find it is a dream.

All these tales describe the fleeting nature of life in a transient world. A long period of time that felt like an eternity was in hindsight shorter than the time needed for a short nap.

The origin of these stories about dreams must be Zhuangzi’s “Hudiemeng.” In his dream he becomes a butterfly and flies away freely. He wakes up and he is only himself, not a butterfly at all, and asks: Is it the butterfly that is dreaming of me, or is it me who dreamed of the butterfly? The Chinese philosopher transcended the boundary between reality and the ideal, between this world and the other world, and reached the point where there is no clear distinction between him and his surroundings. In the East, dreams bring revelations.

In the West, dreams mean hope. Martin Luther King, Jr. cried, “I have a dream,” to express his hope for a world where he would not be discriminated against for the color of his skin. “The American dream” is another example. For those captivated by the American dream, the dream is their goal, something to realize.

Dreams have a certain duality. In his painting “The Dream,” Pablo Picasso combined the front view and profile of his mistress Marie-Therese Walter. He expressed the boundary between reality and his dream, between what he saw and what he wanted to see.

While Kim Jong-il visited China, the opera “Dream of the Red Chamber” was performed by a North Korean opera troupe. The opera is based on the novel of the same name by Cao Xueqin of the Qing Dynasty (1644-1912). The novel depicts the rise and fall of the Jia family.

Just as with other tales about dreams, the lesson is that life is like a spring dream or everything is vanity.

Does Kim know the moral of the opera? His dream is nothing but a spring dream.

Wake up. Spring will be soon over.