Developer’s work is rooted in a passion for pines

Developer’s work is rooted in a passion for pines 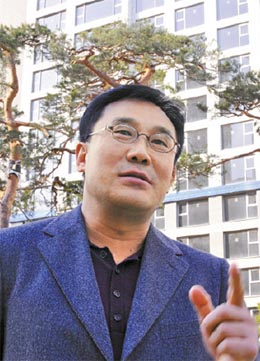 The chairman of Korea’s biggest real estate developer has an unusual fixation with pine trees.

“The class of an apartment complex depends on its landscaping. And pine trees, which are always green and tall, are the best,” said Kim Eon-shik, 57, chairman of DSD Samho Group.

In fact, Kim is known in the construction industry for his affection for pine trees.

Kim wants pine trees at apartment complexes because he believes the trees represent the Korean soul and are part of the country’s history.

He once travelled to Gaya-eup, South Gyeongsang, eight times after learning that there were good pine trees for sale in the area.

His passion for pines is infectious, but it has also gotten him into trouble.

In 2008, Kim bought all 500 pine trees at an old apartment complex in Gangneung, Gangwon. But Korea Land, which owned the trees, said it wanted the trees back and claimed ownership. This led to a legal dispute between DSD Samho and Korea Land. After a yearlong court battle, DSD Samho secured 120 of the trees.

Despite the setback, Kim has done what he can to put pine trees around the country.

With his support, 2,200 pine trees, 1,500 of which are more than 100 years old, are being planted at an apartment complex in Goyang, Gyeonggi. The cost of installing the trees, which were procured from locations around the country, was 25 billion won ($22.4 million), which nearly doubled the the cost of the landscaping work.

In 2008, he donated 60 pine trees to the Kintex center in Ilsan District, Goyang. He even proposed to the Seoul city government that the platanus trees on city roads be replaced with pines.

But until he can convince the city to implement his plan, he is busy planting trees elsewhere in Seoul.

He had 1,200 pine trees planted at the Xi apartment complex in Banpo-dong, Seocho District. The complex is now considered to have the best landscaping in the city.

“Landscaping is an art, like painting,” Kim said. “Like good paintings and music, good landscaping can move people’s hearts.”