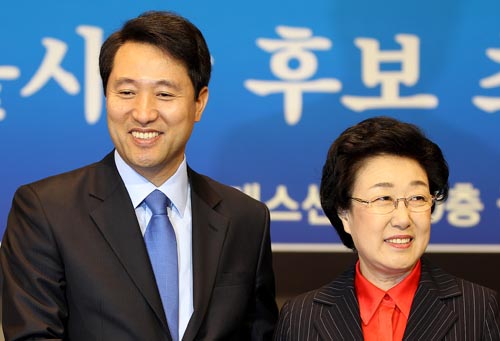 The Grand National Party’s Oh said he was seeking re-election because he wants to complete policies he has pushed for the past four years. Oh said Seoul’s competitiveness has improved significantly during his term and the number of tourists grew by 30 percent. He vowed to make Seoul one of the world’s top five cities.

Han, of the Democratic Party, challenged Oh, saying that the city’s debts have snowballed from 6 trillion won to 18 trillion won under Oh’s leadership due to his “design” projects.

She also said the employment crisis and steep housing prices have harmed Seoulites, and promised to implement middle-class friendly policies by spending 50 percent of the city’s budget for welfare programs.

The Kwanhun Club, one of the largest journalists groups, hosted the debate yesterday.

At the debate, panels of senior journalists grilled Oh about the controversial Gwanghwamun Plaza construction and asked questions about Han’s integrity. The former prime minister was tried for receiving bribes from a local businessman and acquitted. A government appeal is still pending.

Panels also asked Oh and Han about their views on the four rivers project and the Sejong City development program.

While Oh expressed his support for the riverside development, Han made clear her opposition. Oh also backed the government’s plan to revise the Sejong City development plan, while Han insisted that Sejong City should be developed under an initial program of relocating government offices.

Sources said the Democratic Labor Party’s candidate for mayor, Lee Sang-gyu, was positive about the idea of only having one liberal candidate in the race, while New Jinbo Party candidate Roh Hoe-chan was reluctant to give up his chance.

In addition to trying to unite opposition votes, Han also plans to campaign in the memory of the late former President Roh Moo-hyun, whom she served as prime minister. After his term ended in February 2008, Roh’s family faced an investigation on charges of receiving bribes and the former president killed himself on May 23, 2009, shortly after he was summoned for questioning.

The first anniversary of Roh’s death falls days before the election. Han attended the opening of a special exhibition to commemorate Roh earlier this week and will attend a concert in Seoul today to mourn the former president.