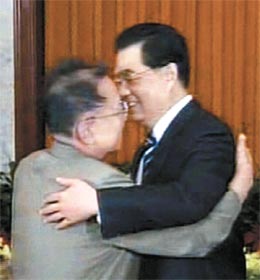 State-run media in China and North Korea confirmed Kim’s trip for the first time yesterday. Kim arrived in China Monday, his first trip there in four years, and was on his way home yesterday. Earlier yesterday, the North’s Korean Central News Agency said in a dispatch that Kim had paid “an unofficial visit” to China from May 3 to 7.

The North Korean report did not mention Kim’s stay in Beijing or his meeting with Hu. But Xinhua confirmed later that Kim and Hu met at the Great Hall of the People in the Chinese capital Wednesday. Sources there had said the two leaders met for about an hour and a half at the hall Wednesday and then later had dinner for another three hours. Hu also brought Kim to a biotech company in Beijing the following day.

According to Xinhua’s report, Kim said during the summit that North Korea “remains unchanged in sticking to denuclearization on the Korean Peninsula,” and Kim and Hu agreed to work together toward that goal.

Before the Chinese news report was published, sources in Beijing told South Korean media that during the Wednesday meeting, Kim offered to return to the six-party talks.

The six-party negotiations, involving the two Koreas, the United States, Russia, Japan and China, were last held in December 2008. Last summer, angry at international sanctions imposed after its second nuclear test, North Korea declared the six-party talks “dead” and vowed never to return. But the North later softened its stance and expressed willingness to engage in multilateral and bilateral talks to discuss the state of its nuclear arms program. 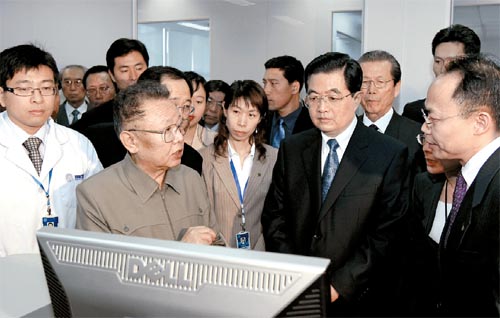 Kim, second from left in front, is accompanied by Hu on a visit to Beijing Boao Biotech Co. Ltd on Thursday. China’s Xinhua News Agency released this photo Thursday. [AP/YONHAP]

But the six-party talks have yet to resume. North Korea demanded that international sanctions be lifted and a peace treaty replace an armistice that ended the Korean War in 1953. The United States and South Korea have insisted that the North would have to make more progress in denuclearization and the North’s return to the table alone won’t help ease the sanctions.

Kim Jong-il’s pledge to work toward denuclearization isn’t new. But it comes at a time when the sinking of the South Korean naval ship Cheonan further compounded the nuclear stalemate.

The Xinhua report on Kim and Hu’s meeting did not include any remarks on the Cheonan case.

North Korea has denied its link to the March 26 incident but remains a suspect in the ongoing investigation. South Korea and the United States have maintained the six-party talks would have to come after the completion of a probe into the tragedy.

South Korea has sought China’s help in case the Cheonan sinking reaches the United Nations Security Council. China is one of five permanent Security Council members with veto power, and unanimity by the permanent members is required for a binding resolution.

South Korea was not pleased with China’s hosting Kim before the conclusion of the Cheonan probe, but China has responded that Kim’s visit and the Cheonan case are separate matters.

“Diplomacy surrounding the six-party talks and the Cheonan case will pit the alliance of South Korea and the United States against that of North Korea and China,” said Yang Moo-jin, professor of University of North Korean Studies in Seoul. “We might even have a new sort of Cold War.”

A diplomatic source said North Korea is forcing Washington to reconsider its stance on holding off the six-party talks until the completion of the Cheonan investigation, and is also testing the U.S.-South Korea alliance.

“The United States has long pressed for North Korea’s return to the six-party table, and at the beginning of Kim’s visit to China, they said they hoped the occasion would lead to the resumption of the talks,” the source said. “If anything, this could speed up the Cheonan investigation.”

The Korean Central News Agency made no reference to Kim’s stay in Beijing and his meeting with Hu, though it did say the Chinese president invited the North Korean leader.

Instead, the report detailed Kim’s stops in the industrial towns of Dalian and Tianjin.

After Kim’s previous visit to China in January 2006, North Korean media reported that Kim had held a summit with Hu and that Kim offered to work with China to make progress on the six-party talks.

A North Korea expert said on the condition of anonymity that the North may have wanted to “emphasize economic cooperation with China” by highlighting Dalian and Tianjin, both of which could serve as development models for North Korea.

Also, the North Korean report was published before Kim arrived back in North Korea. At the time of Kim’s four previous trips to China, the North’s media reported nothing about the trips until the leader had re-crossed the border.