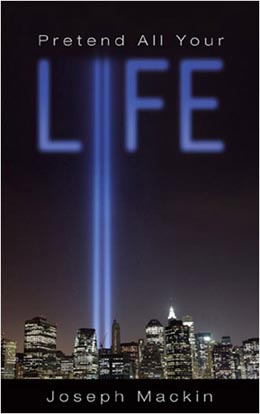 As a New Yorker, Joseph Mackin was enormously affected by the 9/11 attacks, so it seemed natural to focus on this event when he wrote and to combine another issue high up in the America psyche - plastic surgery.

In his debut novel, “Pretend All Your Life,” Mackin writes about a Park Avenue plastic surgeon and his life over six disastrous days in post-9/11 New York City. The surgeon’s son Bernardo, who worked in finance, died in the Twin Towers.

Mackin studied literature at New York University, Yale and at the IEN in Barcelona, Spain, and also worked at The Paris Review but it took him some time before he felt he was ready to pick up a pen and write.

Mackin, who also works as an Internet consultant, spoke to Reuters about writing and his book:

A. I did some Internet consultancy for some plastic surgeons and I was fascinated by how people want to change the way they look to have their outside reflect their insides.

After 9/11 it was the case that the insides of things were exposed - of people and how the world was - and in many cases the insides did not match what was previously thought.

Did you find attitudes to plastic surgery have changed?

In the 1990s it seems plastic surgery was losing its taboo quality and people were no longer hiding it. It became more prevalent across the country and has grown every year for the past few decades as they continue to invent more procedures. One-third of patients now are men. Plastic surgery dropped off briefly after 9/11 but then it came right back.

Liposuction is one of the ones that grew the most. I stood and watched a full face lift and liposuction to the neck and upper and lower eye lids during a four-hour procedure.

I was in Manhattan. I knew people who were killed. Everyone I knew was affected by it. It is still like that. As we have come around, with the new president and the wars, it receded a bit but it comes back fresh again and people look at it in a different light.

Was this the first novel you wrote?

This is my second novel but my first public novel. The first novel I sort of lost in the middle. I was too ambitious in the concept but I am glad that I was, as I found what I needed to know to do better. Some young writers burst right out of the box ... but I needed to know more about the world in order to write this. [With w]hat I knew at 22, I could not write this book.

How long did the book take?

It took me about 18 months to write. After that I took some good advice from people and set it aside for a bit, then revisited it and made some more changes.

Have you started your next book?

Yes, I am writing a book about an elderly woman who loses her husband, but decides one morning that she didn’t lose him but that he is still around. It’s called “Aubage.”